CHICAGO, October 13, 2017 (Newswire.com) - Acey Slade has teamed up with independent cartoonist Steven Reardon Jr. to create Guitar Teacher From Hell, a comic book series that plays on Faustian mythology portrayed in a dark comedy fantasy about the obsession young people have toward learning how to play the guitar. Find out more at www.guitarteacherfromhell.com.

Synopsis: Learning to play guitar is tough for everyone, but for 15-year-old Cory Conners it’s going to be hell. Follow the torment as Cory learns how to play through legendary rockstar guests hosted by Acey Slade.

Issue #1: Cory and his friends try to convince the beautiful Lexi to be the lead singer in their garage band so they can earn a spot in the annual variety show. Don’t miss the epic grudge match between Acey, the Lord of Death – and Lucifer, the Lord of Lies, as they compete for our young hero’s soul!

Acey Slade’s resume includes Rock & Roll Hall of Fame-inducted Joan Jett and the Blackhearts. In addition, he has worked with Misfits, Murderdolls and Dope. As a writer and producer, he has worked alongside Earl Cohen (Lady Gaga/Jessica Simpson), Tom Camuso (Lenny Kravitz/DJ Logic/Etc). A New York-based musician with homes in Los Angeles and Taipei, Acey Slade has also been DJing and producing rock, hard rock, punk and pop for bands around the globe. He has engaged audiences with guitar clinics worldwide trekking from Moscow to Dallas. Other associated acts include: Trashlight Vision, Billy Liar, Amen, Rachel Lorin and Vampire Love Dolls.

Steven Reardon Jr. lives in a suburban Chicagoland lake community with his wife and daughter and has published various independent online comics that can be found on sites such as www.comicfury.com. His creative repertoire includes comics and cartoons that he has created for children as well as for his exploration into adult and autobiographical works.

GTFH, LLC is a cartoon property that was developed as an entertainment-educational hybrid targeting teens and young adults in the guitar space. The company sells digital and printed comic books, branded apparel and memorabilia at www.guitarteacherfromhell.com. The senior partners in the company include Acey Slade, Steven Reardon Jr. and Dylan Moller.

For media inquiries email us at pr@gtfhllc.com. 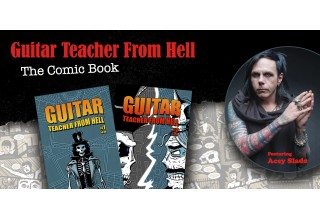 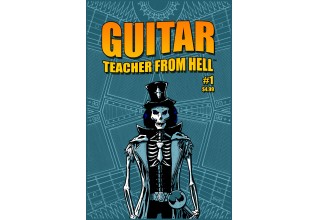 Guitar Teacher From Hell (GTFH, LLC) is a cartoon property that was developed as an entertainment-educational hybrid targeting teens and young adults in the guitar space. We sell digital and printed comic books, branded apparel and memorabilia.