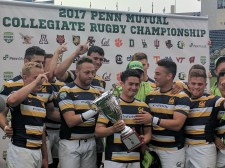 Cal Coach Jack Clark accepted the Pete Dawkins Trophy with his team surrounding him.  The Bears were led by freshman Sam Casano, who scored their two tries, including the go-ahead with 23 seconds left in the first half.  Casano, a 5’10” wing from Granite Bay, Calif., was named the tournament’s Most Valuable Player.

The victory was dedicated to Cal sophomore Robert Paylor, who is paralyzed below the chest and has limited motion in his arms because of a spinal injury suffered during a rugby tournament last month in Santa Clara.

Life, an NAIA school in suburban Atlanta, Georgia, played their second championship final against California in the past four years.  Earlier in the day, the Life women’s rugby sevens squad captured their second consecutive Penn Mutual CRC title with a 17-12 victory over Lindenwood University.

The two-day national championship event in the Olympic sport of rugby sevens attracted 37,518 fans to the MLS stadium in the Philly suburbs, a new record crowd for the eight-year-old annual event.  In addition to the men’s and women’s title tilts, there were championships for the National Small College Rugby Organization and national boys and girls high school competitions.

Penn Mutual, which is in the third year of title sponsorship for the event, presented Jenna Jones, a member of the women’s rugby team at the United States Naval Academy, with their third annual Life of Significance award.  The honor is for Jones’ off-the-field charitable work in the Annapolis community.