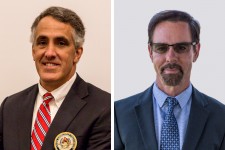 "I hope to unite the USPA and its members in all facets of our sport that we coordinate—grass, arena, gladiator, snow and beach at the high- medium- and low-goal levels," said Campbell.

Campbell has served as USPA president since 2015. He also serves as president of Campbell Companies of Louisiana and is a managing partner in several real estate, oil and gas partnerships. Prior to serving as president, he held various USPA positions including treasurer, lieutenant governor and southeastern circuit governor.

Campbell is a second-generation polo player who began playing as a child in the southeastern circuit in the 1970s. He plays at Point Clear Polo Club in Alabama at the 8-16 goal level. He travels to Flying H Polo Club in Big Horn, Wyoming each summer, and La Vanguardia Polo Club in San Andres de Gilas, Argentina to play polo and operate a small horse breeding operation.

“I hope to unite the USPA and its members in all facets of our sport that we coordinate—grass, arena, gladiator, snow and beach at the high- medium- and low-goal levels,” said Campbell.

As chairman, Campbell will promote continuity and teamwork among the USPA’s three volunteer and staff run LLCs and over 20 committees.

Puetz served as USPA’s executive director for three years prior to being appointed CEO. He has spent over four decades in the sport and held positions ranging from professional

player to club manager. With Puetz’s extensive business management experience, he will be instrumental in carrying out the USPA’s future vision of the sport.

“My goal as CEO of the USPA is to help lead the association, its players and clubs to grow the sport at all levels,” said Puetz.  “I aim to capitalize on future opportunities on and off the field.”

Moving from the Executive Director into the position of Chief Executive Officer, Puetz will continue to make efforts to improve USPA member’s perception and understanding of the Association, its mission and goals, and how it effects and helps members and clubs.

The future of polo in the United States will benefit from the insight, direction and experience of these newly appointed officers for many years to come.

The U.S. Polo Association was organized and exists for the purposes of promoting the game of polo, coordinating the activities of its Member Clubs and Registered Players, arranging and supervising polo tournaments, competitions and games, and providing rules, handicaps, and conditions for those tournaments, competitions, and games including the safety and welfare of participants and mounts.

Founded in 1890, the United States Polo Association (USPA) is the national governing body for the sport of polo. USPA is currently comprised of almost 300 member clubs with thousands of individual members, and oversees 40 national tournaments. For more information, please visit uspolo.org.