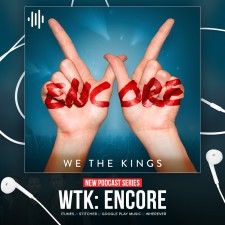 WHITE PLAINS, NEW YORK, March 23, 2017 (Newswire.com) - Uncover Studios and the platinum-selling band We The Kings are thrilled to announce the premiere of WTK: Encore, an original podcast series giving fans and music lovers an exclusive, unscripted look at the rock star lifestyle.

WTK: Encore debuted its first episode on March 23, 2017; now available to stream and download on iTunes, Stitcher, Google Play Music, and more. Fans are encouraged to subscribe using their favorite podcatcher so they don’t miss a single episode.

Click here to listen to the first episode of WTK: Encore.

We The Kings is currently on their ten year anniversary tour, with stops across North America, Canada, and Europe. The band is excited to take the huge fanbase they’ve created throughout the past decade on an exclusive audio journey. WTK: Encore will take listeners behind the scenes to discover the riveting, hilarious, and untold stories of the band.

WTK: Encore is the VIP ticket to the band members’ lives on the road, in the tour bus, backstage, and with family and friends. The episodes are honest, funny, insightful, and beautifully recorded. For long-time fans, newcomers, and anyone who loves music, this is as real as it gets.

We The Kings has one of the most loyal fanbases out there, with over 7 million social media followers worldwide. They are a dedicated and devoted group of guys who keep it real and genuine with their fans.

”We The Kings bring an electricity to everything they do and the love and respect they show for their fans is why they’ve grown such a large, loyal following," said Dave Keine, Uncover Studios' Managing Director. "We’re really excited to explore where that magic comes from as we go behind-the-scenes and get closer to the band in WTK: Encore."

Uncover Studios is giving brands a variety of unique opportunities to get involved in the excitement. From custom messages and content shaping, to viral promotions and once-in-a-lifetime experiences, Uncover Studios will customize a fully-integrated campaign with celebrity content at the core. Brands can partner with Uncover and We The Kings to deliver the right message to the right audience, and ensure their message is being heard.