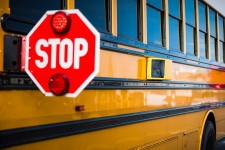 On April 7, 2020, the NTSB released the abstract for its investigative report on the fatal collision involving four students who were crossing a road to board a stopped school bus in Rochester, Indiana, on October 30, 2018. Three of the student pedestrians, all of the same family, were killed.

The NTSB report included the following findings and recommendations:

The tragedy that occurred in Indiana is not an isolated incident. Over six days in late 2018, six students were killed, and eight students and two adults were injured by vehicles, either violating school bus stop arms or hitting students and adults while they were waiting at a bus stop.

In 2019, school bus drivers from 39 states participated in a voluntary one-day nationwide safety survey and reported that 95,494 vehicles passed their buses illegally. Throughout a 180-day school year, these sample results point to more than 17 million violations among America’s motoring public. The number of incidents is likely far higher, since not all school bus drivers participated in the voluntary survey, according to survey sponsor, the National Association of State Directors of Pupil Transportation Services.

“NTSB is the gold standard for safety across all modes of transportation,” said Jean Souliere, CEO of BusPatrol, a seamless stop-arm enforcement program provider with an ongoing mission to secure and modernize school bus fleets across America.

At least 22 states have enacted stop-arm laws to catch and punish motorists who pass stopped school buses by allowing local jurisdictions to install cameras on the outside of the bus to record illegal passings, according to the National Conference of State Legislatures.

“It’s time for the nation’s governors and policymakers to urgently embrace this child safety technology,” said Souliere. “Enforcement and education go hand in hand. By modernizing traditional enforcement through AI-enabled stop-arm cameras and cloud-connected safety technology, we change motorist behavior and safeguard children on their journey to and from school.”

BusPatrol is a safety technology company that uses state-of-the-art SafetyTech to identify vehicles that break the law, to create a culture of responsibility and awareness around school buses.

BusPatrol is a safety technology company that uses state-of-the-art SafetyTech to identify vehicles that break the law, to create a culture of responsibility and awareness around school buses.