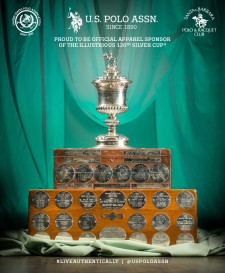 WEST PALM BEACH, Fla., July 28, 2020 (Newswire.com) - U.S. Polo Assn., the multi-billion-dollar, official global apparel brand of the United States Polo Association (USPA), announced it will serve as the apparel sponsor for the 2020 Silver Cup®​. This event, which is being held this year from July 24-Aug. 9 at the historic Santa Barbara Polo & Racquet Club, is recognized as one of the USPA’s oldest and most prestigious tournaments with a rich history spanning some 120 years. Polo fans, and those new to the sport, should tune in to GlobalPolo.com for dates and times to watch the thrilling tournament action live or via rebroadcast.

As the 2020 Silver Cup’s official apparel sponsor, U.S. Polo Assn. will be featured in multiple ways including the main scoreboard, social media, staff outfitting, trophy ceremony, etc., throughout the tournament. Also of note, the brand, which sells merchandise in 180 countries worldwide, is also apparel partnering with the Santa Barbara Polo & Racquet Club throughout the 2020 season.

Originally named the Junior Championship, the Silver Cup was first played in 1900. Since then, this historic tournament has undergone name and venue changes over the years. Most recently played at Aspen Valley Polo Club in 2019, the high-profile and highly competitive tournament boasts some 50 Polo Hall of Famers throughout its notable past. This year, the stunning Pacific Ocean, majestic mountains and beautiful vineyards of Santa Barbara serve as the event’s backdrop.

“As a brand that is authentic to the sport of polo and built on its great heritage, we are excited to continue our support of the 2020 Silver Cup, with this year being a much needed inspirational event during these challenging times for all of us,” said J. Michael Prince, President and CEO of USPA Global Licensing (USPAGL), which manages the multi-billion-dollar U.S. Polo Assn. brand. “We are also very honored to partner with the world-class Santa Barbara Polo & Racquet Club and thank them for hosting this important event for polo in the United States.”

“As the proud owners of this historic cup, we are excited to bring together these eight evenly matched and powerful teams to the fields of the Santa Barbara Polo & Racquet Club,” said Robert Puetz, CEO of the USPA. “Set between the foothills of the Santa Ynez Mountains and the Pacific Ocean, Santa Barbara is the ideal backdrop for this year’s particularly meaningful tournament. With all of us working to manage the current global climate and coronavirus pandemic, this tournament promises to be not only a highlight of polo’s summer season, but of the global sporting season overall.”

Founded in 1890, the United States Polo Association (USPA) is the national non-profit governing body for the sport of polo, comprised of almost 300 member clubs and thousands of individual members. USPA Global Licensing Inc. (USPAGL) is the for-profit subsidiary of the USPA and the exclusive worldwide licensor for the USPA’s global licensing program which distributes the leading sport-inspired apparel brand U.S. Polo Assn. U.S. Polo Assn. is the official brand of the USPA. The brand offers apparel, accessories, footwear, travel and home goods and has a global footprint of $1.7 billion with worldwide distribution through 1,100 U.S. Polo Assn. retail stores, department stores, independent retailers and e-commerce with a footprint in 180 counties. Ranked the fourth-largest global sports licensor in License Global magazine’s 2019 list of “Top 150 Global Licensors,” U.S. Polo Assn. takes its place alongside such iconic sports brands as Major League Baseball, National Football League and National Basketball Association.

U.S. Polo Assn. is the official brand of the United States Polo Association (USPA), the nonprofit governing body for the sport of polo in the United States, and one of the oldest sports governing bodies, having been founded in 1890. With a global footprint of $1.7 billion and worldwide distribution through more than 1,100 U.S. Polo Assn. retail stores, department stores, independent retailers, and e-commerce, U.S. Polo Assn. offers apparel for men, women, and children, as well as accessories, footwear, travel, and home goods in 180 countries worldwide. Recently ranked the fifth-largest sports licensor and 38th overall in License Global magazine's 2020 list of "Top 150 Global Licensors," U.S. Polo Assn. now takes its place alongside such iconic sports brands as National Football League, and National Basketball Association, and Major League Baseball. Visit uspoloassnglobal.com.

USPA Global Licensing Inc. (USPAGL) is the for-profit subsidiary of the USPA and the exclusive worldwide licensor for the USPA's global licensing program. USPAGL manages the global, multi-billion-dollar U.S. Polo Assn. brand and is the steward of the USPA's intellectual properties, providing the sport with a long-term source of revenue. USPAGL and its subsidiary Global Polo Entertainment (GPE) also manage Global Polo TV and global broadcasts that bring more awareness to the sport of polo. Visit globalpolo.com.

The Brownestone Group was launched in 2015 with a mission to offer the most effective executive search, strategic consulting, and leadership advisory services. We introduce exceptional talent to brands and their leaders, transforming businesses and careers. Founder Tim Boerkoel possesses more than 25 years of retail, consumer, hospitality, and luxury experience, advising and recruiting for startups and global corporations alike in their searches for CEOs, Presidents, Board Members, and C-Suite talent. Brownestone, along with its global network of affiliate partners, operates as a true partner to clients ensuring swift yet long-lasting results.