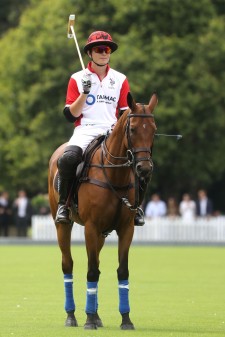 The scope of Porter’s role as global brand ambassador is focused on the United Kingdom, broader Europe and the Middle East, where he grew up as a youth and continues to spend much of his time as a professional player. Porter will shine the spotlight on the dynamic crop of young polo players coming up through the ranks by posting regularly on social media about his activities and by fully engaging in media requests for interviews and campaigns. He’ll be outfitted in U.S. Polo Assn. jerseys, apparel and gear both on and off the polo field.

Now 20, Porter began riding horses at age 5 and has been playing polo since age 9. He recently won the Copa Presidente (20 goal) trophy in Argentina and will play for Santa Clara for the 2nd Annual GAUNTLET OF POLO™. Born in London, Porter had his first-ever polo lesson in Dubai with Martin Valent, who remains his manager today. He now commutes between homes in Florida and England.

“Ever since that first lesson 11 years ago, I fell in love with the sport and I'm fortunate that my passion has become my career,” said Porter. “I’ve worked hard training for every opportunity I’ve had. One of my most memorable was playing the East Coast Open and winning the trophy,” Porter recalled.

With an extremely bright future ahead of him, Porter’s dream is to be a top-rated professional polo player by improving his handicap year over year. He has already competed at some of the largest polo games in the world, winning the “high goal” East Coast Open, the FIP World Cup Zone Final, the Mansion Cup, the Bronze Trophy at Sotogrande and the 50K National 12-Goal two years in a row. He also reached the final of the Ylisvakier Cup in the U.S. as well as has competed in the illustrious Westchester Cup and the prestigious GAUNTLET OF POLO™ Series held at the International Polo Club in South Florida.

“Having Henry represent U.S. Polo Assn. in some of our most important international markets on and off the field is a win-win. He is not only a tremendous young athlete who continues to get better each year but is one of the true gentlemen of the game,” said J. Michael Prince, President and CEO of USPA Global Licensing. “I have watched Henry play in games around the world that have included teaming up with Prince Harry in the King Power Royal Charity Cup to playing at the highest level in the United States at the U.S. Open Polo Championship®. We are excited to have him be part of our global ambassador lineup.”

When he’s not striving to advance his polo skills, Porter is studying business at the Repton School in Dubai, whose academic program is based on British National Curriculum and is accredited by the Cambridge and London University Exam Boards. Porter also stays active playing tennis and golf and he enjoys skiing.

“I’m really honored to have been chosen as a global brand ambassador for such an authentic sport-inspired brand like U.S. Polo Assn. that does so much for the sport and players,” said Henry. “I look forward to gaining great exposure with both the new and loyal fans and followers of the sport by sharing my fast-paced polo activities and my exciting travels.”

USPA Global Licensing Inc. (USPAGL) is the for-profit subsidiary of the USPA and the exclusive worldwide licensor for the USPA’s global licensing program. USPAGL manages the global, multi-billion-dollar U.S. Polo Assn. brand and is the steward of the USPA’s intellectual properties, providing the sport with a long-term source of revenue. USPAGL also produces global broadcasts to bring the sport of polo to consumers and sports fans around the world including the GAUNTLET OF POLO™, the sport’s new high-goal $1 million prize money series played on U.S. Polo Assn. Field.

The Brand Machine Group houses a diverse and industry-leading portfolio of fashion and sports brands, including U.S. Polo Assn., across clothing and accessories with over 35 years of experience. A global licensing specialist, partnering with recognized market leaders managing a seamless and collaborative process of designing, manufacturing and delivering quality product whilst championing the DNA of our brands, The Brand Machine Group is the official U.K. and Ireland partner for U.S. Polo Assn. menswear and the European partner for U.S. Polo Assn. childrenswear.