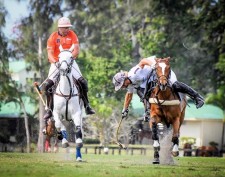 WEST PALM BEACH, Fla., September 5, 2019 (Newswire.com) - U.S. Polo Assn., the official brand for the United States Polo Association (USPA), is thrilled to welcome polo player Harrison Azzaro as the newest member of its growing roster of global brand ambassadors. Now 19, Azzaro has been playing professionally since 13 and is the son of former 10-goaler Mike Azzaro, who is considered one the best American polo players of all time.

Born in Windsor, England, Azzaro traveled with his family wherever his father’s polo tournaments took them. In addition to summers in England, much of his childhood was spent in Wellington, Florida, and San Antonio, Texas, where his family owns Lonesome Wind Ranch. In short, Azzaro literally grew up on polo fields. “My dad will tell you that I could ride before I could even walk,” he said. “I’ve been playing polo my whole life.”

Currently a one-goaler with an extremely bright future ahead of him, Azzaro already has one big achievement under his belt: playing in the 2017 Sterling Cup, a 20-goal tournament held at the Grand Champions Club in Wellington. “That was a huge tournament,” Azzaro recalled. “And I was grateful to have an opportunity that not a lot of young players get.”

Also a talented pony trainer, Azzaro is especially proud of Beetletrick, a seven-year-old mare he raised from birth. “She’s the daughter of Beetlejuice, my father’s best horse,” he explained. “So many people told me she was too small to make it in polo. But this year in Florida, Facundo Pieres, who is the best polo player in the world right now, played her in a 40-goal game.”

The scope of Azzaro’s year-long role as global brand ambassador is broad and designed to shine the spotlight on the dynamic crop of young polo players coming up through the ranks. He’ll be outfitted in U.S. Polo Assn. apparel and gear both on and off the field, will post regularly about his polo-related and other daily activities on social media, and will fully engage in media requests for interviews and campaigns.

“The authenticity of U.S. Polo Assn. means a lot to me since I grew up playing polo with my dad from an early age. I’m honored to have been chosen as an ambassador for a sport-inspired fashion brand that represents not only a style I wear but also does so much for the sport of polo. This opportunity will allow me to share my polo activities with the fans and followers of the sport that I love,” commented Azzaro.

“We couldn’t be more excited to have Harrison on board as our newest global brand ambassador,” said J. Michael Prince, President and CEO of USPA Global Licensing. “Yes, he’s ‘polo royalty’ with a legendary father, but he’s also his own man. He loves our U.S. Polo Assn. brand and worked in our USPA Clubhouse this past year teaching consumers about the sport of polo and our brand. With his commitment to excellence, his innate athleticism, and his charming, outgoing personality, Harrison perfectly represents the future of our great brand and sport.”

USPA Global Licensing Inc. (USPAGL) is the for-profit subsidiary of the USPA and the exclusive worldwide licensor for the USPA’s global licensing program. USPAGL manages the global, multi-billion dollar U.S. Polo Assn. brand and is the steward of the USPA’s intellectual properties, providing the sport with a long-term source of revenue. USPAGL also produces global broadcasts to bring the sport of polo to consumers and sports fans around the world including the GAUNTLET OF POLO, the sport’s new high-goal $1 million prize money series played on U.S. Polo Assn. Field.