During Chitravina N. Ravikiran's recent concert tour to India, he set an astounding composing record setting music to 1330 verses of ancient poetry in only 16 hours. 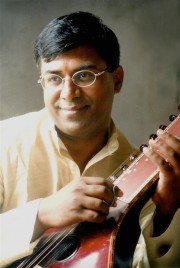 Philadelphia, PA, January 26, 2016 (Newswire.com) - U.S. based musician-composer Chitravina N. Ravikiran, celebrated as the “Mozart of India” by the Wisconsin State Journal and who NPR said, “gave new meaning to the word prodigy,” made history in world music between January 12-14, during his recent trip in Chennai, India. There, Ravikiran set a composing record setting music to 1330 tirukkural verses in 16 hours. To put things in perspective, this is comparable to completing a 26-mile marathon in barely 15 minutes. Tirukkural, composed by Tamil philosopher Tiruvalluvar during the 2nd-4th Century BC as couplets, are replete with themes ranging from moral codes of conduct to romance.

These verses, which transcend region and religion and have fascinated scholars from both the East and West for centuries, were never intended for musical recitals. While there have been a few attempts to set them to music prior, Ravikiran’s 16-hour feat is unprecedented in world music. A project of this magnitude in any type, style and language would normally require several weeks to months for even the most creative composers at an average of 8-10 minutes per verse. Ravikiran, in an inspired zone,  set music to nearly 350 verses in over three hours, at an average of 100 verses per hour on the first day, and another 420 in under six hours on the second day. On the third day, he set music to the remaining 560 in just over six hours.  His aggregate of 1330 verses tuned in 960 minutes averages out to a mind-boggling 1.4 verses per minute.

“To me, it is not just a record but more of a miracle, which cannot be measured in human terms. To be honest, I don't even know if I can take credit for this! Things just flowed automatically,”  said Ravikiran, speaking to the media at the end of the final session. “I first got the idea around the 9th or 10th of January and spoke to a couple of people about it on 11th and started composing on 12th. So what you have here is pure inspired output.”

Knowledgeable musicians, scholars and listeners who witnessed the event commended the artistic merits of Ravikiran’s endeavor calling it “historic,” “incredible” and “unimaginable.”  Ravikiran used as many as 169 different ragas (modes and scales) for tuning the 1330 verses, most times opting for one raga for each section of 10 verses. Moreover, the pundits were stunned by his out-of-the-box rhythmic approach in some verses, using traditional, yet scarcely explored talas (time cycles).

Celebrated in world music as the inventor of the award-winning concept Melharmony (https://www.youtube.com/watch?v=Uwqfrt9DEl8), a unique approach to “create Western-style harmony anchored on the rules and aesthetics of evolved melodic systems,” Ravikiran is also acknowledged as probably the most prolific musician-composer in Indian classical today with more than 700 pieces to his credit, including operatic dance creations Ramayana and Mahabharata.

Ravikiran’s genius even at the age of two stunned the world and sitar maestro Ravi Shankar, who declared, “If you don’t believe in God, look at Ravikiran.” He received a fellowship from the Music Academy Madras at the age of two and was the youngest to win the president of India's award for artistic excellence. Ravikiran gave vocal concerts at the age of five before switching to the 21-string chitravina at the age of 11. Today, he is one of the most sought after artists globally, and as Radio National Australia dubbed him, “perhaps the greatest slide instrumentalist in the world.”

Ravikiran has regaled audiences in several countries in major venues and events including: the Chicago World Music Festival, Madison Festival, Cleveland Festival in the U.S; the Millennium Festival in the United Kingdom; the Toronto Harborfront Festival in Canada: the Autumn Festival in France, the Brisbane Festival in Australia, the Europalia Festival in Belgium: the Brazil Festival; the Great Masters Series in Japan and Hungary, the Esplanade Festival in Singapore and Festivals of India in Germany, Switzerland, Holland, Poland, Czech, Slovakia, Croatia and diverse countries. In addition, Ravikiran has numerous awards to his credit including citations from Houston, Texas and Tulsa, Oklahoma and “Melharmony Day” proclamations from cities of Madison and Middleton in Wisconsin and the President of India’s Award for artistic excellence. To learn more, visit https://en.wikipedia.org/wiki/N._Ravikiran.

Chitravina N. Ravikiran has taken select repertoire of master Indian composers like Oottukkadu Venkata Kavi (1700-65?), Tyagaraja (1767-1847) and Dikshtar (1775-1835) to diverse audiences through his own performances as well as melharmonic creations with Western Classical orchestras such as the BBC Philharmonic and Wisconsin Chamber Orchestra. He has also collaborated with top notch performers of diverse genres including Jazz, Blues, Pop, African, Middle-Eastern and Chinese and founded his own group, ta-ki-Ta Trio with Glen Velez and Loire Cotler.Cotler.Cotler.Cotler.