Missionary medic Paul Heier and his wife, Thania, have been working with first responders, hospitals, and needy children in several Latin American countries for more than a decade. 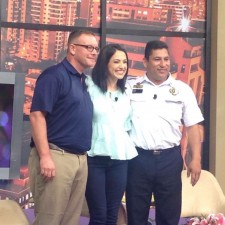 Lehigh Acres, Florida, August 16, 2016 (Newswire.com) - Missionary medic Paul Heier has partnered his organization Misión Hispana with Guatemalan firefighters to provide CPR, First Aid, Wilderness First Responder, and Trauma classes across the country. Heier attended paramedic school with the desire to help people in remote areas and teach these critical subjects to short-term missionaries and national firefighters. His work has spanned across Guatemala from Santiago, Sacatepéquez all the way to Puerto San Jose, Escuintla.

The medical mission work started when Heier offered to help a Guatemalan fire chief bring his crew up-to-date in CPR. He couldn't imagine the response that followed. Heier has been asked to teach classes to dozens of firefighters and police officers across the country. He was recently honored with a television interview on a Guatemalan news channel to explain why he's willing to help. He was even made an honorary assistant chief of one fire department. Heier says this work is his way of loving his neighbor.

“This work has been incredibly rewarding for us and impactful for those who are accessing this much needed training,” says Heier. “Right now we have more requests than we can handle and desperately need volunteers to come and help teach. We encourage all those who truly want to serve people in need to connect with us and learn more about our mission work and trips."

Guatemala and many Latin American countries face severe poverty and the needs of the people are great. Poverty hasn’t changed much in Guatemala during the last 20 years, according to the World Bank. Close to 75 percent of the population is estimated to live below the poverty line and almost 58 percent live below the extreme poverty line which the World Bank defines as struggling to afford even a basic basket of food. The services provided by Misión Hispana meet a critical need that is not being met in the country.

Misión Hispana recently celebrated 11 years of helping to reach the forgotten in Latin America. The organization relies heavily on volunteers and donor funding to meet its mission. Over the years, Misión Hispana has hosted groups from the U.S. and Canada on mission trips in Nicaragua, Honduras, and Guatemala. For more information about their work, to donate or to inquire about volunteer opportunities, visit ReachingtheAmericas.com.

Founded by missionaries Paul and Thania Heier, Misión Hispana has been providing critical services to the people within villages across Latin American countries since 2005. The Heiers started their work in Nicaragua where they spent nearly seven years starting a Hope Center, a small camp, and helping to build ten churches. Later they provided other mission services in Honduras and Guatemala. For more information visit, ReachingtheAmericas.com.

Misión Hispana recently celebrated eleven years of helping to reach the forgotten in Latin America. Missionary medic Paul Heier and his wife, Thania, have been working with first responders, hospitals, and needy children for more than a decade.