The island nation joins forces with nChain, Elas Digital, and Faiā to embark on a digital transformation project that includes creating a national digital ledger and registry using blockchain technology

FUNAFUTI, Tuvalu, December 22, 2020 (Newswire.com) - The Tuvalu Government has today announced its plans to become the world's first paperless society using Bitcoin Satoshi Vision (BSV) and its digital public ledger. The highly scalable, low-cost system, which is in accordance with the original, set-in-stone Bitcoin protocol, provides long-term thinking and sustainability highly valued by the Tuvalu Government. Typically seen as "small," "remote," and "precariously placed," Tuvalu and its partners view the nation's characteristics as an ICT strength that will allow it to maneuver more rapidly in terms of tech development. Working in collaboration with the leading blockchain technology company nChain, the Bitcoin consultancy Elas Digital, and the community-tech consultancy Faiā, Tuvalu has taken the first step in migrating to a completely digital infrastructure using BSV's unprecedented scalability and efficiency.

Tuvalu is inhabited by roughly 11,000 people but currently does not have an electronic banking system. The plan to move the country's national register to the blockchain will be followed by an exploration into digital currency, representing a huge feat of technological leapfrogging.

Comprising nine islands, Tuvalu has a domestic revenue of around $60 million, $5 million of which comes from its ownership of the .tv domain. Assigned to Tuvalu in 1995, the domain has, in recent years, become a lucrative asset for the country because of the proliferation of live-stream programming and competitive gaming. In 2021, Tuvalu's agreement with the Virginia-based network infrastructure firm Verisign, which currently has rights to administer the .tv domain, will come to an end, prompting new negotiations and providing a contributing catalyst for future investments in the nation.

The National Digital Ledger partnership is facilitated by Faiā and its Managing Director, George Siosi Samuels, whose Tuvaluan heritage prompted him to develop a five-point plan to assist Tuvalu with its digital transformation. In a 2020 Medium article, George identified ways in which Tuvalu could preserve its culture, land, and heritage by leveraging its .tv domain name and introducing a nation-wide digital transformation program.

George Samuels explained: "After the article was published and gained traction, I was approached by the Tuvalu Government to consult on how Tuvalu could leverage blockchain technology for their digital transformation efforts. This is a critical investment in the future of Tuvalu, and so it's my sincerest ambition to honor my ancestors by helping them leapfrog into the future I see coming with firm foundations. We identified nChain and Elas as the right transformation partners, primarily because of their unmatched blockchain development capabilities, patent portfolios, and highly secure and scalable solutions using the BSV blockchain. Data is the new oil, and Tuvalu is taking the right steps to navigating this new area, just like our wayfinding ancestors did with the oceans."

At the forefront of the climate-change crisis, Tuvalu is among the first nations directly and massively affected by the impacts of rising sea levels. As the country evaluates its future in light of the continuing effects of climate change, the partnership with nChain, Elas, and Faiā presents a revolutionary long-term investment.

George Samuels further explained that: "While many options are being explored nationally to thwart the rising sea level, the Government of Tuvalu sees immense value in the mobility of a digital national financial infrastructure if climate change were ever to irreversibly impinge upon the land territory of Tuvalu. Beginning in early 2021, nChain, Elas, and Faiā will work with Tuvaluan nationals to identify the aims and ambitions of individuals, which will inform how the groundbreaking blockchain technology will be employed."

The project will seek to deliver an innovative 'Tuvaluan National Digital Ledger,' which aims to transform the processes of managing the Tuvalu Government and economy in a package designed to suit the unique culture, geography, and society that all Tuvaluans share. The concept was developed by Elas Digital CEO Brendan Lee, who said: "This opportunity represents a chance for us to demonstrate how a digital transformation can take place in a location with specific and entirely unique needs and deliver a toolset that helps improve the standard of living and access to opportunity while minimising the disruption to existing processes, both legal and administrative. We aren't trying to remove people from any part of this, but are rather seeking to empower them as both decision-makers and controllers of their own resources."

He added: "Another component of this project is to create a strong local element, where the Tuvaluan people take a leadership role, ensuring the project best represents their needs. The project will also give people the knowledge and tools to build their own systems in the future and to participate in the opportunities that these sorts of transformations present at a global level."

nChain is recognised as a pioneer for organizations and enterprises looking to realise the potential of blockchain technology. The Zug, Switzerland-based company boasts one of the largest teams of blockchain engineers in the world, and works to continually advance blockchain technology, propelling it beyond traditional fintech platforms to solve unique challenges like those faced by the people of Tuvalu. The BSV network, along with its public blockchain, serves as the underlying system predominantly used by nChain, as it offers unparalleled levels of security and scalability. It is estimated that by 2021, it will have the capacity to process 50,000+ transactions per second (TPS), surpassing major payment networks like the Visa network. The scalability of the BSV network means that a nation like Tuvalu can implement relevant technology rapidly, while allowing for organic growth and development over time.

David Washburn, CEO of nChain, said: "What the Tuvalu Government is doing is truly revolutionary. As a nation, they face many challenges that others don't, and they are meeting those challenges with the determination and pioneering spirit necessary to truly reshape the future of their country. Blockchain technology has the potential to transform lives, and we're honored to have been charged by the visionary leaders of Tuvalu to enable this landmark shift toward a digital economy."

Simon Kofe, Minister for Justice, Communication and Foreign Affairs for Tuvalu, added: "In Tuvalu, we strive to recognize our culture and values both in our daily lives and at the national policy level. While taking a values-based approach, however, our eyes are always fixed firmly on the future. Tuvalu is already a leading Pacific nation in terms of outreach and action on climate change, but we hope to become a leader in other areas as well, especially ICT. Through our partnership with nChain, Elas, and Faiā, we are optimistic that blockchain technology will provide a key platform for unlocking new opportunities and securing a greater future for Tuvalu."

nChain AG is a world-leading provider of enterprise-grade blockchain solutions, helping businesses and organizations realize and protect the value of their data. With offices in Switzerland, the United Kingdom, and Slovenia, nChain boasts one of the largest teams of blockchain developers globally and a leading portfolio of intellectual property relating to blockchain technology. nChain is committed to helping clients maintain a competitive advantage in business through more efficient management of their data.

Faiā was founded in Singapore in 2019 by George Siosi Samuels, with a single mission: to bridge gaps between communities and technology. We believe in the power of the small and uncommon to unleash the power of communities. As a result, we typically work with high-growth startups and communities, but we may work with others depending on the project.

Elas Digital is a software engineering company driven to solve real world business problems using the scalability and efficiency of the Bitcoin public ledger as a growth substrate. Our structuring solutions and uniquely simple token solution can be tailored and scaled to suit enterprise or government needs. The team at Elas Digital are committed to building the highest velocity financial services in the world.

About Ministry of Justice, Communication and Foreign Affairs, Tuvalu Government

One of Tuvalu's most wide-ranging Ministries, MJCFA covers Foreign Affairs, the Attorney General's Office, ICT, Media, the Judiciary, the People's Lawyer, the Ombudsman's Office, the Tuvalu Telecom Corp., and the Police, among other services. 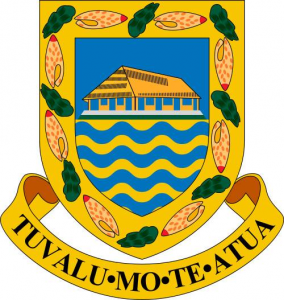