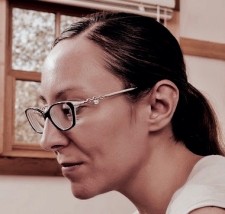 On the occasion of her appointment, Ms. Darling stated: "As a longtime admirer of the outstanding books published by Tupelo Press, I'm honored to have the opportunity to serve this vibrant community of authors and readers. I look forward to building on the press's important work in the literary arts and in the community at large."Kristina Marie Darling is the author of twenty-seven books, most recently Ghost / Landscape (with John Gallaher; BlazeVox Books, 2016) and the forthcoming Dark Horse (C&R Press, 2017). Her awards include three residencies at Yaddo, where she has held the Martha Walsh Pulver Residency for a Poet, as well as a Hawthornden Castle Fellowship and three residencies at the American Academy in Rome.  She is the recipient of grants from the Whiting Foundation and Harvard University's Kittredge Fund. Her poems appear in New American Writing, The Mid-American Review, Poetry International, Passages North, Nimrod, and many other magazines. The possessor of two PhDs, she has published essays in Agni, The Gettysburg Review, The Kenyon Review, The Los Angeles Review of Books, The Iowa Review, The Literary Review, and elsewhere. She has served as Editor-in-Chief of Tupelo Quarterly since June 2016, and will continue in that editorial position as well.

In a statement this morning, Jeffrey Levine said: "During the past 18 years of Tupelo's existence, I have felt extremely fortunate to have found people of such extraordinary calibre to carry forward the mission of Tupelo Press. But having the great good luck to bring Kristina Marie Darling into the editorial side of our publishing family leaves me nearly giddy with delight. She is a woman of extraordinary gifts: editor, poet, essayist, scholar, and publisher in her own right; her engagement with our publishing house marks something, I believe, quite momentous in American nonprofit literary publishing. At a time when the nation as a whole, and the arts in particular, are under siege, this announcement is as much about the critical place literary publishing takes at the center of our collective imagination as it is about the fortunes of a single publishing house. We welcome Kristina Marie Darling to one of those significant places in the world where art is born and given wings."

Founded in 1999, Tupelo Press is an independent, nonprofit literary press devoted to discovering and publishing works of poetry, literary fiction, and creative nonfiction by emerging and established writers.

Tupelo Press, Inc. is an independent, literary press devoted to discovering and publishing works of poetry, literary fiction, and creative nonfiction by emerging and established writers. Tupelo Press is a 501(c)(3) nonprofit company.