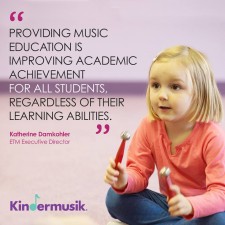 TUCSON, Ariz., August 30, 2017 (Newswire.com) - Early childhood education proponents in Tucson and elsewhere are excited about a study released by Kindermusik International detailing a phenomenal 32 percent increase in language and literacy skills for preschoolers after completing the Kindermusik program. This comprehensive study involving 300 children was conducted over the course of a school year by SEG Measurement. This research study clearly details the benefits of a thematic Kindermusik curriculum over the results obtained by the control group of similar mixed demographic preschoolers. This study gains more traction from the long-discussed premise of the Mozart Effect (the benefits of playing classical music for children) and a recent PBS Nova program "Can the Power of Music Make the Brain Come Alive?"

According to Mary Rudy, the Director of Kindermusik at Musical Steps in East Tucson, "Since 1978 our Kindermusik classes have been igniting children's minds and hearts with a comprehensive, age specific curriculum of music and movement. After decades of teaching Kindermusik to hundreds of children, it's rewarding to see more parents and educators come to an understanding of the tremendous head start that our Kindermusik classes provide the children. I would think that any parent knowing of this research, would wish for their child to participate in a Kindermusik program."

Providing music education is improving academic achievement for all students regardless of their learning abilities.

About Kindermusik at Musical Steps in East Tucson

For the past 10 years, Musical Steps has received the Maestro Award from Kindermusik as one of the top 5 percent of programs worldwide. Director Mary Rudy is also a Montessori and music educator, and spent many years on the faculty of Kindermusik International training teachers. Rudy was also a speaker on the power of music in early childhood development at a conference on "The Potential of the Child" in three cities in Columbia. On her staff is Jodi Darling, a local musical theatre performer who teaches musical theatre in Tucson schools and performed nationally in Broadway shows.

Kindermusik is the world's leading provider of music and movement programs for young children, enjoyed by millions of families in more than 70 countries since 1978.

Kindermusik offers a full spectrum of developmentally appropriate classes for children ages newborn to seven, featuring award-winning music and movement activities that promote school readiness and stimulate development in every area of the young brain. https://youtu.be/efkbMUZmRps. 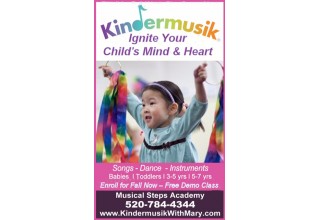 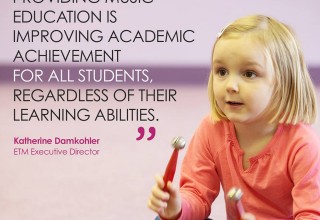 Kindermusik is the world's leading provider of music-based education for children from birth through age seven. We use the power and joy of music-making to help children learn and grow during the years most critical to brain development.