Employer's Support for the Guard and Reserve (ESGR) presented TTi Global with the ESGR Seven Seals Award at the 2017 ESGR Annual Awards Dinner held on April 29th at the Kellogg Center in East Lansing. 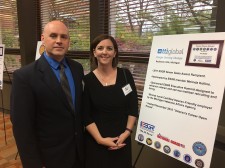 Rochester Hills, Mich., May 3, 2017 (Newswire.com) - The Michigan Employer Support for the Guard and Reserve (ESGR) recognized 13 employers who have provided exceptional support for the men and women serving in the National Guard and Reserve. This year TTi Global was recognized with the ESGR Seven Seals Award for their outstanding work in advancing veteran employment.  Major General Vadnis, the Adjunct General of Michigan and Director of the Michigan Department of Military and Veterans Affairs keynoted the affair.

“TTi Global received the ESGR Seven Seals Award for their support of the Michigan Committee for ESGR,” says Gary D. Aten, of the Michigan Committee for Employer Support of the Guard and Reserve. “TTi Global is being recognized for their sponsorship of the ESGR Executive Summit held in September of 2016 at the Grosse Point War Memorial. Their sponsorship and support was critical to the success of the event.”

“We are honored to be recognized by the ESGR,” says Lori Blaker, President/CEO of TTi Global. “Our company is very committed to increasing employment opportunities for the men and women who serve our country. As a workforce development company, we highly value the contribution veterans bring to any organization.”

ESGR, a Department of Defense program, was established in 1972 to promote cooperation and understanding between Reserve Component Service members and their civilian employers. Learn more:  http://esgr.mil/About-ESGR/Who-is-ESGR.aspx

With a staff of over 2000 employees in international operations, they offer a wide range of services, tailor made to drive business goals, including business consulting, research, staffing, workforce development and learning solutions. TTi Global headquarters are located in Rochester Hills, Michigan.