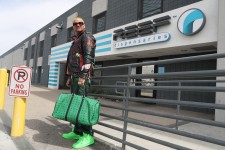 Las Vegas, NV, May 1, 2017 (Newswire.com) - Tryke Companies, operators of Reef Dispensaries in Nevada and Arizona, is proud to announce a new partnership with American recording artist and global ambassador RiFF RAFF as the exclusive producer and distributor of two strains of medical cannabis. “Red Carpet Kush,” an uplifting, inspirational sativa, and “Lamborghini Leg Lock,” a stunningly potent indica, will be the premiere strains of the line, endorsed and curated by RiFF RAFF himself.

“It’s the equivalent to when the Lamborghini came out,” said RiFF. “Imagine NASA, when it first came out with the space program. This is what this is.”

Tryke’s alliance with RiFF RAFF is the company’s third excursion into celebrity-branded medical cannabis, continuing in the tradition and runaway success of Wiz Khalifa’s Khalifa Kush and the Exotikz By Berner line of top shelf strains.

The two strains will be unveiled at Reef Dispensaries’ Las Vegas locations available May 1st and in Northern Nevada on May 5th.

Reef Dispensaries’ 165,000-square-foot indoor cultivation facility, as seen on Complex news, is the largest of its kind in the state. Reef’s Las Vegas base of operations uniquely houses each the cultivation, production, and sale of its products under one roof.

Reef Dispensaries offers care for medical marijuana patients at six locations across Nevada and Arizona, with an unprecedented level of concierge customer service and a wide selection of products for every palette.

Riff Raff is an American musician from Houston, TX, known for such hits as “TiP TOE WiNG iN MY JAWWDiNZ” and “Dolce & Gabbana.” He boasts over 140 million cumulative YouTube views and over 1 million fans each on both Twitter and Instagram. He released his first album, Neon Icon, through Diplo’s Mad Decent label and recently followed up with his second album in late 2016, Peach Panther. Riff Raff has worked with a stable of A-list artists and celebrities throughout his career, including James Franco, Chance the Rapper, Lil Yachty, Wiz Khalifa, Donald Glover, Mike Posner, Gucci Mane, G-Eazy, Travis Barker, and many more. He has also appeared on Vice’s Traveling the Stars: Ancient Aliens with Action Bronson, MTV2’s Wild ‘N Out, and MTV’s G’s to Gents, among other television shows.

Tryke Companies is a network of ten licenses in Arizona and Nevada for the cultivation, production and retail sale of medical and recreational cannabis. Tryke operates Reef Dispensaries in Las Vegas, Reno/Tahoe, and Phoenix.