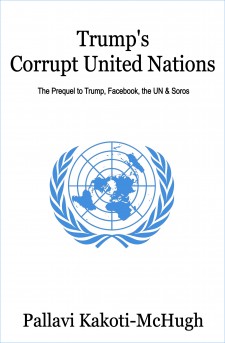 SYDNEY, June 27, 2019 (Newswire.com) - In her new book, "Trump's Corrupt United Nations," former UN staffer and invitee of UN University Pallavi Kakoti-McHugh says millions of U.S. and other countries' taxpayer dollars are used to fund corruption and racism at the UN, and reveals how President Donald Trump has handled the dire situation so far. The book is now available to order on Amazon and at major book retailers.

-  The big-time corruption and cover-up of the lawlessness of UN staff.

-  The alleged racial discrimination practice of a certain UN department and its staff towards nationals, residents of western countries compromising climate change management, the environment, well-being of the world and future generations in sustainability

-  Her time spent at the UN–the racism, sexism, environmental malpractice, human rights abuses and corruption she experienced and witnessed.

-  How lawmakers and President Donald Trump have handled the situation

Pallavi Kakoti-McHugh is one of United Nations’ most world-famous whistleblowers who blew the whistle on what she alleges to be the world’s largest segregated and racist workplace in 2016-17 before Harvey Weinstein Exposé era when most people and media outlets feared to expose corruptions of powerful people and held them to a different standard of accountability. Kakoti-McHugh is a broadly qualified expert on climate change. She is an international human rights and climate change speaker, an international political analyst, a climate change consultant to world leaders and lawmakers, and an investigative writer and an author of public interest books and legislation, who writes and speaks about a broad range of public interests issues from whistleblowing, corruption, climate change to human rights.