TrumpCoin is cryptocurrency (like Bitcoin), which was created by the community to show support for Trump, with a side goal of pushing cryptocurrency forward in the real world, by using investor driven donations, causes, and projects to aid in making America great again. 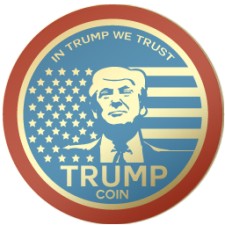 Province, Virginia, November 4, 2016 (Newswire.com) - ​​​There is a vast amount of potential in this currency. TrumpCoin is a global method of funding Trump's financial expenses, such as the wall; it has incredibly quick transactions that can be sent to virtually anywhere on the globe with negligible fees, 2% yearly fixed interest earned on one's own personal computer or device, and it's decentralized, being kept alive by the people through nodes all around the world. There is no central authority for this coin so people can be independent from larger components; this takes power from big banks and corporations and hands it to the people. It's basically Trump's very own personalized currency and is its own fund raising platform for fueling great changes in America. One of the coin's goals is to be integrated in to Trump's agenda legally by clearing up the laws on cryptocurrency and bringing it to the public light to show the capabilities and advancements in this field of technology.

Also, TrumpCoin is the opposite of Hillary's Correct the Record; some fans behind TrumpCoin operate a program called Re-Correct the Record in which twitter users are tipped TrumpCoin for spreading the truth about Hillary's lies or by just showing support  for Trump. A user even sent 500 TrumpCoins to Trump himself on Twitter.

"Trumpcoin provides a known amount of coins available for the people to use as digital money. It is easy to use and provides a way for the unbanked and underbanked to participate in the world economy like never before. Trumpcoin respects your privacy in an age where everyone is hacked and spied on, and Trumpcoin is the official fuel for Trump related causes in each country; it unites everyone together in support of the ideals that international law provides and protects that so commonly are referred to as western values, which are in fact human values."

TrumpCoin.com was created in order to educate people about TrumpCoin, and act as the main hub for info and resources related to TrumpCoin. The domain was purchased around late June, and TrumpCoin itself was created in early February. A lot of progress, as well as many ups and downs have been encountered along the way. Doubters of the coin never thought the coin would survive, yet here it is, 9 months and still going strong. TrumpCoin has had a very interesting, dramatic history, there is even a book written on TrumpCoin's past by Christopher P. Thompson on Amazon, titled "TrumpCoin - Make Crypto Great Again".

Also, recently a casino for TrumpCoin was created by the community and currently includes Blackjack and slots. Check it out here. The casino only accepts TrumpCoins which can be purchased with Bitcoin from various exchanges, and currently the going price of one TrumpCoin is about three cents. There is a current supply of about 6.5 million TrumpCoins which slowly grows at a 2% annual rate by interest being given to people on the coins that they hold; there is no longer any standard mining for TrumpCoin.

Please see additional links at the bottom of the page for further reading.