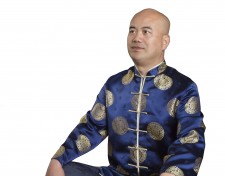 He has correctly predicted over 100 elections including the 2000 Bush win and the 2008 Obama victory. https://goo.gl/ijaHP6

Based in Australia and with methods that cut through the logic cluster of any given event, Master Feng has never hedged his predictions after 30 years of research. https://goo.gl/l3Qwxn

Other startling predictions in the run-up to next week's U.S. Presidential Election include:

Trump plane's energy has similarities of planes that have crashed.

In Chinese history, the highest level of healers and Feng Shui Masters are Masters with x-ray eyes. Master Feng possesses a unique gift and reads personal energy colors and those of homes and businesses. He pinpoints strengths and weaknesses - highlighting dangers before they happen.

He sees the Trump Tower buildings being surrounding by dark forces that will continue to attract an array of trouble well into the future. Master Feng states that the energy around Donald Trump's plane has some resemblance to planes that have had disasters. He has also seen that Hillary Clinton and major members of her team all have losing energy which will lead to bad luck post-election.

"Since 1913, almost all Presidents have died of fatal issues in the head and chest. In all, 10 out of 11 U.S. Presidents such as Lyndon Johnson, a heart attack, Richard Nixon, a stroke, Ronald Reagan, Alzheimer's disease and John F. Kennedy, assassination. Former surviving Presidents will likely suffer similar fates. George W. Bush and Bill Clinton have had heart and major artery operations. Jimmy Carter and George H. W. Bush have brain illnesses. Vice Presidents and their families are also in danger. Dick Cheney would not have survived without a heart transplant. Joe Biden's son, Beau Biden, died from brain cancer and I am sure that there is a 90% chance that Vice President Biden will also suffer from brain problems."

Once Donald Trump and his family move into the White House the evil energies that inhabit the building will target Trump's fragile areas, particularly any narrowed or hardened blood vessels, the neck, blocked energies in the shoulders, back, prostate and blood sugar levels.

The Secret Service protection should be increased, since these negative Feng Shui energies will attract unprecedented numbers of assassination attempts towards the President and his family.

Hillary Clinton has the Most Unfortunate Candidate energy:

According to Master Feng, no candidate since John F. Kennedy has won the Presidency without purple color energies surrounding them. He says that Hillary Clinton does not have purple but only black energy indicating bad luck, brain, and balance-related health issues, near death and legal problems. Bill Clinton's energy is also showing heart, digestion and back problems.

The Master explained that people do not realize there are vast bodies of energy outside the physical world affecting lives. "The red energy color indicates career success, love, and health, while black energy results in financial ruin, business failure, divorce, illness and even death. The leader of a country requires only the purple energy color and the White House's purple yang energies point towards Donald Trump, which means he will enjoy events more favorable than unfavorable leading up to Tuesday's election. Conversely, there are yin black energies pointing towards Hillary Clinton. With these energies in place, Trump will cut in front of Hillary and win the 2016 election."

Master Yu Gui Feng, known as the Master with x-ray eyes and named the Oracle of the 21st Century, is recognized as the world's pre-eminent Master in Feng Shui. He is a descendant of King Wen who was the founding father of Feng Shui and has been using his abilities to better people's lives since he was just 8 years old. His unique gift has been featured on national television, including Sky News and Networks 7, 9 and 10.

Master Feng was born in China and has resided in Australia for the past 20 years. After being invited to lecture at La Trobe University and the University of Melbourne, he was granted permanent residency and citizenship of Australia.

"I've been given the gift of x-ray vision, a sixth sense that allows me to see the energy colors of objects and buildings, as well as those inside the bodies of people. This allows me to understand the true source of Feng Shui problems and disturbances. A Master with x-ray eyes only appears in Chinese history every 2,000 years."

Master Feng has spent over 3 decades reading and analyzing personal energy fields. No other person in the world can match his remarkable powers. Whether reading a person, a world-famous celebrity or a head of state, his phenomenal ability never fails to reveal to his subjects the true nature of their being, heretofore unknown even to them. Master Feng's ability to read people's energy fields is also widely applied in the areas of business and politics.

Master Feng can instantly tell people about threats and opportunities simply by watching them walk into their home or place of business.