Scientists from the Guy Harvey Ocean Foundation (including Dr. Guy Harvey), as well as members of the Dolphinfish Research Program joined the anglers on the water and they managed to tag 7 marlin with satellite tags and more than 150 Mahi-Mahi with spaghetti tags for research in their combined effort to study and conserve Pacific fishing resources based from Tropic Star Lodge in Panama.

Prizes were also awarded for:

Tropic Star Lodge will host two exciting fishing tournaments in 2020. The 6th Annual Tropic Star Roosterﬁsh Tournament is scheduled for May 14-19, 2020. The tournament features Tropic Star’s Bertram fleet and targets the famed fighter of the Pacific – the Roosterfish (Pez Gallo). The 2020 Billfish Tournament is slated for Nov. 19-23, 2020. Many of the teams from this year’s tournament have already entered. ​

Tropic Star Lodge is located 150 miles southeast of Panama City on the coastline of the remote Darien Jungle and has provided the ultimate in offshore and inshore fishing adventures for more than 56 years. The Lodge is well-known in the fishing community as a premier location for black marlin, blue marlin and sailfish. Tropic Star has a fleet of 14 classic and remodeled 31’ Bertrams, plus a 45’ Hatteras and a 32’ Blackfin with an experienced staff of local captains and crew to provide some of the best fishing experiences in Central America. The lodge also features modern accommodations, including a spa and wellness center, 3 bars and dining locations, first-class menu options, plus upgrade villa accommodations for guests who want some extra luxury during their jungle stay. www.tropicstar.com info@tropicstar.com (800) 682 3424.

Cut out of the side of a mountain at the edge of the Darien Jungle on the Pacific coast of Panama, Tropic Star is truly a superstar among the world's big game fishing destinations. 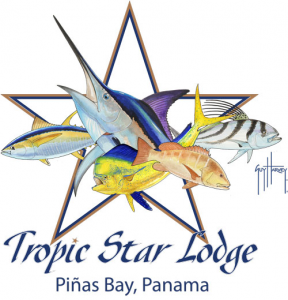