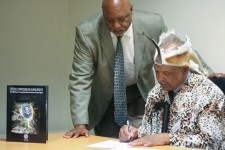 “I am issuing an official warning to the Khoisan people and all other tribes and nations against the dangers of psychiatry and I mandate all kings and leaders of all Southern African nations to denounce psychiatry and the psychiatric drugging of children,” reads the resolution. “We are a spiritual people; and psychiatry is an attack upon the souls of man and against God.”

The King points to reports that South Africa has one of the world’s highest rates of prescribed psychiatric drugs for children labeled with ADHD—a rate even higher than in the U.S.

There are 27 international drug regulatory warnings on psychiatric drugs causing mania, hostility, violence and even homicidal ideation, and in 2005 the South Africa Medicines Control Council issued a “Drug Alert” that antidepressants cause increased risk of suicide in children and adolescents.

The Citizens Commission on Human Rights is a mental health watchdog founded in 1969 by the Church of Scientology and Dr. Thomas Szasz, a renowned professor of psychiatry. With its worldwide corps of activists, CCHR is responsible for enactment of laws outlawing involuntary commitment, brutal shock treatment and widespread enforced drugging. CCHR has also contributed to protecting and saving the lives of millions of people by exposing and jailing thousands of criminal psychiatrists and blowing the whistle on psychiatric crime.