"The Family Business" is based on The New York Times bestselling novels by Carl Weber. 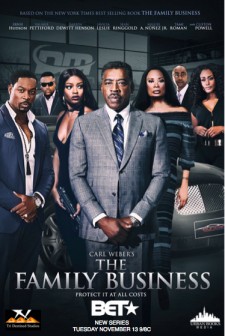 LOS ANGELES, November 2, 2018 (Newswire.com) - Tri Destined Studios announces the licensing of eight-part drama series “Carl Weber’s The Family Business,” based on The New York Times best-selling author’s most popular family crime drama novel starring Ernie Hudson that will air on BET. Meet the Duncans, a prominent family from Jamaica, Queens living fast and luxurious. By day, they’re an upstanding family; by night, they live a dangerous secret life. The patriarch of the family, L.C. Duncan (Hudson), is at the age when he’s starting to think about retirement and has to decide which of his children should take over his thriving exotic car dealership. The Duncans quickly come under siege from some of the top politicians, mafia and drug cartels in the city. The Duncans will have to stick together or die separately. Originally developed and produced as an indie film franchise, BET has licensed the content to air this dynamic production in an explosive way. The highly anticipated television event “Carl Weber’s The Family Business,” the series makes its debut on Tuesday, Nov. 13 at 9 p.m. ET/PT on BET.

In the series premiere titled “We are at war,” L.C. Duncan (Ernie Hudson) has decided it’s finally time to pass on the mantle of leadership. All this during a time when their Asian supplier has cut them off, and their rivals are threatening to put them out of business. Watch the extended series trailer here: https://vimeo.com/297834334/807d4ec0cc

Weber’s “The Family Business novel,” published in 2012, is the first in a series of novels under the same title. In fact, this first title launched eight books in what has been a popular and ongoing series about the travails of the Duncan family. The book series has sold over 3 million copies.

“We at Urban Books are excited about our new venture with BET Networks and Tri Destined Studios. We look forward to years of making great film and television productions together.” - Carl Weber, President, Urban Books Media

“We are so grateful to bring Carl Weber’s acclaimed literary works to our BET Family and to empower this level of esteemed diverse talent in front and behind the camera.” - Nikaya D. Brown Jones, CEO, Tri Destined Studios

“Carl Weber’s The Family Business is a gloriously addictive series and a prime example of BET’s on-going commitment to tell compelling dramatic, character-driven original stories, anchored in the Black experience. We look forward to our partnership with Tri Destined Studios, Urban Books Media and are thrilled to welcome Carl Weber to the BET family.” - Maureen Guthman, SVP of Content Strategy, BET Networks.

Hudson is repped by Michael McConnell of Zero Gravity Management and APA.

For more information on “Carl Weber’s The Family Business,” the series, visit the official page at BET.com. Also, join the conversation on all social platforms by using hashtag #TheFamilyBusinessBET.

Carl Weber is the New York Times bestselling author of titles such as “The Preacher’s Son,” “So You Call Yourself a Man,” “Something on the Side,” “Up to No Good,” “Big Girls Do Cry,” “Torn Between Two Lovers,” and “She Ain't the One.” He is the Publisher and Editorial Director of Urban Books CEO of Urban Books Media, which is currently producing films based on several of his bestselling novels.