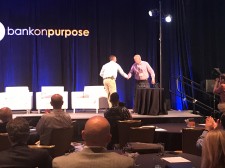 Albuquerque, NM, May 26, 2017 (Newswire.com) - Precision Lender, the world’s leading commercial pricing and profitability platform, has awarded Trevor Lewis, Commercial Loan Officer of Los Alamos National Bank (LANB) the Trophy Deal of the Year.  Lewis earned the acclaim for his diligent work on the One Central Project coming to downtown Albuquerque.

When asked why Trevor was recommended, Stan Sluder, Chief Lending Officer and Director of Sales states, “Trevor’s perseverance and creativity empowered a state-of-the-art development that will help reshape downtown and stimulate growth for the community.”

"I am proud to be involved in bringing one of the coolest and most innovative buildings to the Albuquerque Metro."

One Central will become the newest and largest entertainment hub to the downtown area. The construction loan project currently sits at a $17 million investment for Phase 1, located at the corner of 1st and Central Avenues.  “I am proud to be involved in bringing one of the coolest and most innovative buildings to the Albuquerque Metro,” comments Lewis.

Lewis received his award at the annual BankOnPurpose conference in Austin, TX this May among other Purposeful Banker Award recipients throughout the nation.  “We are proud to have had Trevor onboard the Albuquerque team since 2015,” states Robert Gabaldon, Market President, Albuquerque Metro.  “He brings a professional and infectious energy to the bank, offering strengths in management and teamwork.”

Los Alamos National Bank (LANB) is one of the largest locally-owned bank in New Mexico with current assets of more than $1.2 billion.