Town Suit, a growing company gaining traction in the tie industry, was started by a Utah Valley University student entrepreneur 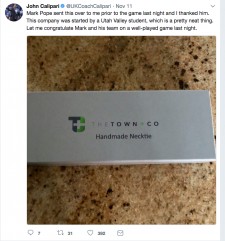 OREM, Utah, November 14, 2017 (Newswire.com) - Utah Valley University student Noel Lopez started Town Suit as a business project his freshman year of college. Now as a junior, the company is launching in a big way. Town Suit is a necktie manufacturer that specializes in one-of-a-kind custom neckties for universities and businesses. Starting as an online store, the Town Suit ties are now in 43 retail spaces in nine states and three major airports, including Hartsfield–Jackson Atlanta International, Seattle–Tacoma International and John F. Kennedy International.

“This has been a really exciting way to highlight my brand and build relationships between universities,” says Lopez. “After the game, it was nice that Coach Calipari tweeted that he was thankful for the necktie that I made and that Coach Pope presented to him.”

This tie presentation is the first for the season. The university has been helping Lopez with some of his marketing, and Pope saw a video the school produced about Lopez. After a conversation between the two, it was decided that Lopez would handpick a tie for each opposing coach on this year’s Utah Valley basketball schedule. It would be a way to promote Lopez’s brand and bring some goodwill between the universities.

Lopez has a series of ties with specific flag colors and icons representing each nation or state. Lopez gave Pope a tie for each state that Utah Valley University men's basketball team is playing against. Some states that don’t have a representative tie yet, Lopez hand-selected ties that matched the colors of the specific university.

To learn more about Lopez and this up-and-coming new brand, visit TownSuit.com.

Town Suit is a necktie manufacturer that specializes in one-of-a-kind custom neckties for universities and businesses.