TONOGOLD VERIFIES GOLD AND SILVER MINERALIZATION BELOW THE LEVEL OF THE SUTRO TUNNEL ON THE COMSTOCK LODE AND HITS 25 METERS AT 13.5 g/t GOLD AND 38.4 g/t SILVER ON THE OCCIDENTAL/BRUNSWICK LODE

Since our November 17, 2020 update, we have pushed forward the early stages of our $7 million drill exploration program aimed at proving the existence of significant gold and silver mineralization in the Comstock District located in the vicinity of Virginia City and Gold Hill, Nevada, approximately 40 kilometers southeast of Reno. Tonogold recently secured 100% control of 3 kilometers of the Comstock Lode's 5 kilometer strike length from Comstock Mining, Inc.

Drilling began on September 8, 2020. Tonogold has two drill rigs on site, one reverse circulation (RC) and one core. To date, the drillers have completed six holes: four on the Gold Hill section of the Comstock Lode and two on the Occidental/Brunswick Lode. 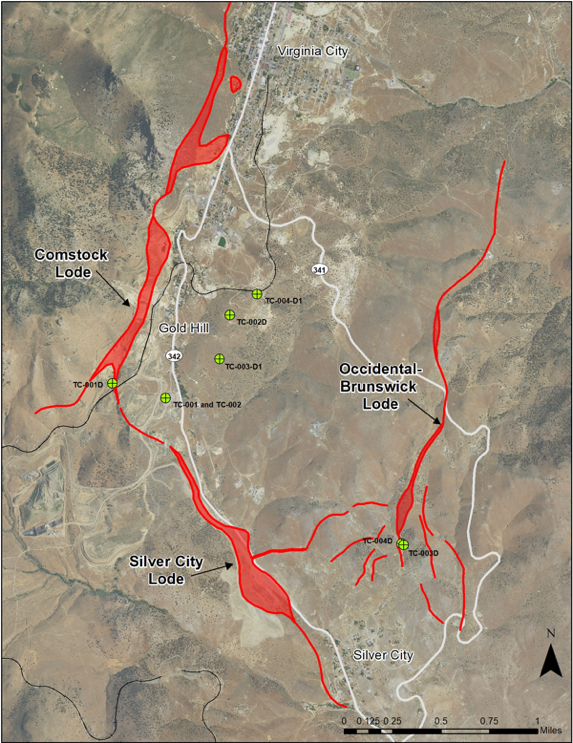 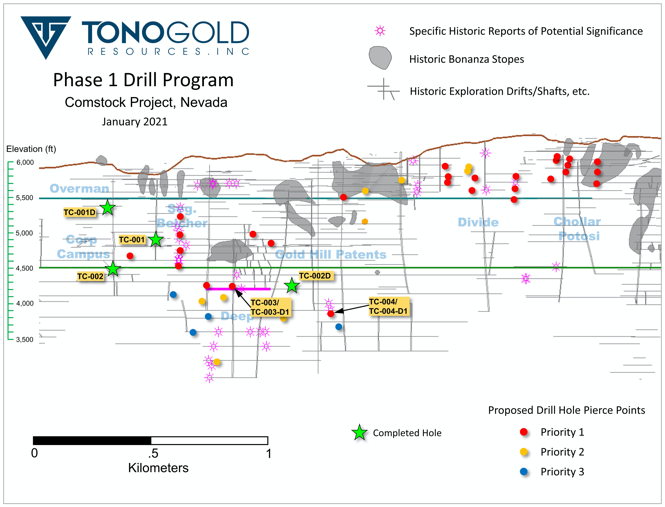 Description of holes completed or in progress:

* in progress or pending completion with core

Assays pending for intervals above the primary mineralized zones in holes TC-001, TC-002, and TC-002D; see body of press release for detailed descriptions.

To date, we have completed three holes on the old Overman ground (one core hole (TC-001D), and two RC holes (TC-001 and TC-002)) and one core hole on the old Kentuck Mine (TC-002D). We have also pre-collared two other holes targeting zones of suspected mineralization in the old Belcher and Yellow Jacket mines (TC-003 and TC-004).

On the Overman ground, hole TC-001 was drilled as an angle hole but shallowed over its length and was terminated (as discussed in the news release dated November 17, 2020). Hole TC-002 was completed from the same pad as a vertical hole. Both TC-001D and TC-002 encountered zones of quartz veining that showed the presence of weak gold and silver mineralization. We interpret both holes as representing the Silver City and Comstock lodes just south of their intersection. (See results table above.)

On the Kentuck ground, difficult drilling conditions greatly slowed progress with core hole TC-002D. The hole intersected the quartz veining associated with the Comstock Lode's hanging wall at a depth of 575 meters. From that point, the hole passed through the Comstock structure for 30.8 meters, from a depth of 575 meters to 605.8 meters. Tonogold expects the structure's true width to be between 85% and 90% of the downhole intersection. Assay results returned values ranging to 3.43 grams per tonne ("g/t") gold ("Au") over 1.52 meters against what we believe to be the lode's footwall. (See results table above.)

South of TC-002D, the drillers pre-collared hole TC-003 (cross section below). Significant ground water was encountered and resulted in the premature termination of the pre-collar at a depth of 305 meters. A core rig is currently advancing the hole (as TC-003-D1) in order to test a zone of suspected gold and silver mineralization in the old Belcher Mine. This is Tonogold's first hole targeting a specific, high-probability target identified by our historical research. This level hasn't been prospected or mined since the deep levels of the Gold Hill mines were lost to an underground flood in the early 1880s. Among other relevant evidence, our research uncovered a Belcher Mine report published in the Mining & Scientific Press in 1886 that states, "exploration on the 1,750 [foot] level shows the ore to continue into the submerged depths below." Hole TC-003/TC-003-D1 aims to test the mineralization described in that report (see Figure 3 below). 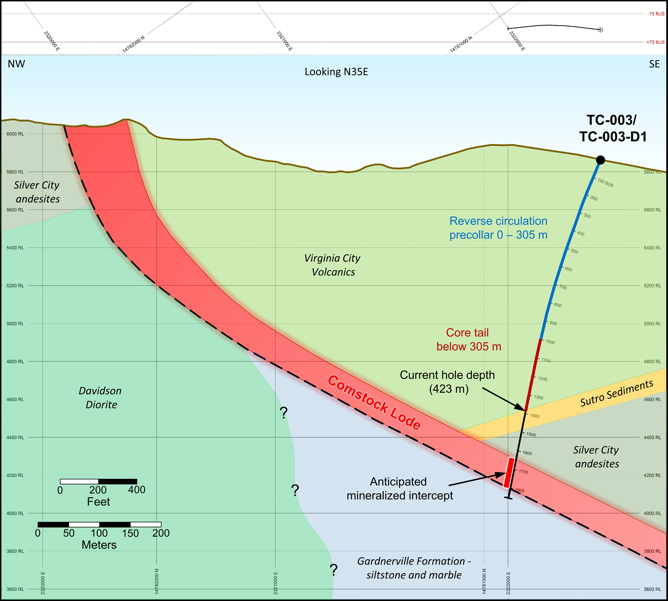 North of hole TC-002D, Tonogold has pre-collared hole TC-004 to a depth of 444 meters (see Figure 4 below). This hole targets another specific location of suspected gold and silver mineralization identified by our historical research in the old Yellow Jacket Mine about 600 meters below the surface. The core rig will continue this hole through its intersection with the Comstock Lode once it has completed hole TC-003-D1. 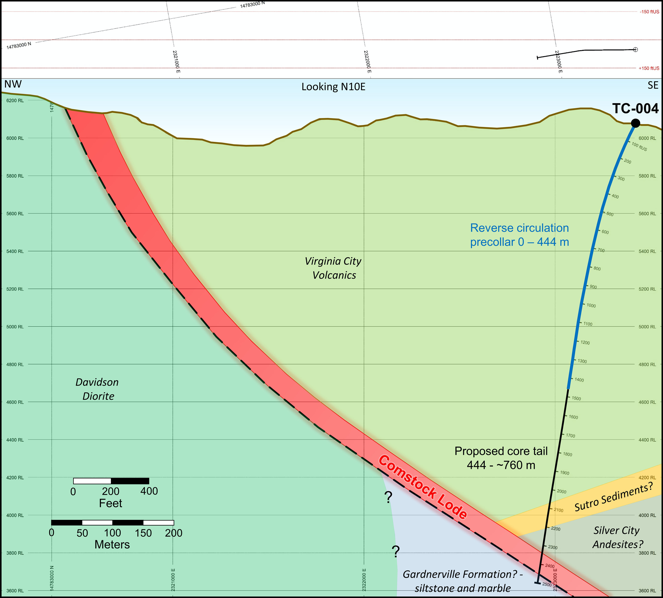 We have received additional permits for further drill locations that will allow us to test other high-priority targets identified by our historical research in the Gold Hill section of the Comstock Lode above the Sutro Tunnel. The Sutro Tunnel is the long adit built in the nineteenth century to drain the Comstock Lode to a depth of approximately 500 meters below the surface. We are also currently filing additional permits.

In addition to the Comstock Lode, Tonogold has a second exploration target on the Occidental/Brunswick Lode, where prior drilling showed the presence of gold and silver mineralization.

The Occidental/Brunswick Lode is a parallel structure lying about 1.0 to 1.5 kilometers east of the main Comstock. During the nineteenth century, approximately 34,000 tonnes of mineralized material was extracted from the Occidental Mine at an average head grade of approximately 40 g/t gold equivalent.

The owner of the claims on which Tonogold recently secured an option conducted a small-scale reverse circulation drill program in 2018. Those holes demonstrated the presence of significant near-surface oxide gold and silver mineralization (see results table below). Consequently, Tonogold has developed a second exploration program to confirm and expand on those results.

Summary of results from the 2018 RC exploration of the Occidental/Brunswick Lode:

True thickness of mineralization estimated to vary from 20% to 100% of the interval length, with an average of about 77%.

The first phase of Tonogold's Occidental/Brunswick Lode exploration encompasses 22 holes with an initial budget of approximately $600,000. The first two holes of this program were completed in December 2020.

The first of those holes (TC-003D) confirmed known existing high-grade mineralization by drilling within 2 meters of 2018 hole I18-12.

The distribution of grades in reverse circulation drill hole I18-12 indicated the possibility of down hole contamination in portions of the mineralized interval. While our recent results did not completely eliminate that possibility, TC-003D did confirm the presence of a wide near-surface, high-grade mineralized zone and a narrower low-grade zone at depth. The most significant interval averaged 57.9 g/t Au and 77.2 g/t silver ("Ag") over 5.18 meters. Details of the mineralized intervals encountered in TC-003D are summarized in the following table:

True thickness estimated at approximately 80% to 85% of interval length.

Should results of Occidental/Brunswick exploration warrant, Tonogold plans to expand exploration of the structure with an eye toward defining resources. If successful, Tonogold anticipates that those resources could be processed at the existing processing facility in American Flat, which Tonogold has exclusive rights to operate under a long-term lease arrangement.

Drill core is logged for geology, photographed, and marked for sampling on breaks averaging 1.52 meters in length. Following logging, the core is sawn in half with one half placed in labeled sample bags and sealed for delivery to the assay lab. RC samples are collected on 1.52-meter intervals in labeled sample bags and generally contain a ¼ split. Representative chips from the intervals are logged for geology. Both core and RC samples are stored at a secure facility prior to transport to the assay lab.

Certified standards, blanks and duplicate samples are inserted in the sample series at the rate of one each per every 20 samples. Samples are delivered to ALS Minerals' lab in Reno, Nevada where they are dried, crushed and pulverized. Gold analysis is performed at the Reno facility utilizing a 30-gram fire assay with an AA finish (Au-AA23). Samples containing greater than 10 g/t Au are reanalyzed utilizing fire assay with a gravimetric finish (Au-GRA21). Silver analyses are completed at ALS Minerals' Lab in Vancouver, Canada using a four-acid digestion with an AAS finish (Ag-AA61). Samples containing greater than 100 g/t Ag are reanalyzed utilizing a four-acid digestion with an ICP-AES finish (Ag-OG62). Results for standards, blanks and duplicates are monitored for precision, accuracy, and contamination upon receipt of assays.

Brian Metzenheim, (MMSA-QP), VP of Exploration for Tonogold Resources and a qualified person as defined by National Instrument 43-101 has designed and supervised the work completed for Tonogold Resources outlined in this news release. The technical content disclosed in this press release has been reviewed and approved by Mr. Metzenheim. Mr. Metzenheim is not independent of Tonogold as he is in the position of VP and holds incentive warrants.

Steve Ristorcelli and Steve Weiss of Mine Development Associates, Inc. (MDA), a division of RESPEC, are qualified persons as defined by National Instrument 43-101. The technical content disclosed in this press release and derived from the 2018 Technical Report titled 2018 Updated Technical Report on Gold-Silver Mineralization at the Ida Claim Group, Silver City Mining District, Storey and Lyon Counties, Nevada: History, Geology and Exploration and dated September 4, 2018 has been reviewed and approved by Mr. Ristorcelli and Weiss. Both Mr. Ristorcelli and Mr. Weiss are independent of Tonogold.