This is Not the Marijuana They Smoked at Woodstock

This is the wrong time for complacency, warned a drug abuse prevention program at the Church of Scientology Pasadena, held to educate parents and community groups on new dangers from an old drug. 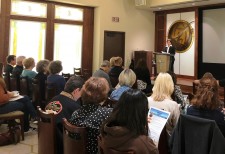 PASADENA, Calif., April 12, 2018 (Newswire.com) - The Church of Scientology Pasadena hosted a seminar April 7 to promote drug education as a way anyone can help in the face of the drug epidemic. The seminar featured the Foundation for a Drug-Free World’s Truth About Drugs initiative. The program’s booklets, videos and Educator’s Guide make it easy to learn and carry out effective drug prevention.

Attending were numerous parents, community groups including Day One, The Way to Happiness Foundation, and local representatives of the National Institute of Drug Abuse. The Foundation for a Drug-Free World and Pasadena Public Health Department provided attendees sets of educational materials.

Public perception of the risks has declined while the actual risks have climbed.

Foundation for a Drug-Free World volunteer

Public Affairs Director of the Church of Scientology Pasadena, Karla Bartholomew, introduced the program and played two sections of the Foundation’s feature-length The Truth About Drugs: Real People, Real Stories documentary — an overview of drug abuse, and the section on marijuana in which former drug users describe the role marijuana played in their becoming addicts.

There are too many kids who have easy to access to weed, now that it is legal in the state of California, says drug prevention activist Cathy Morfopoulos who conducted the seminar.

Some in the audience were startled to hear Morfopoulos’ describe the strength of the THC in today’s marijuana compared with that of the “Woodstock” era. “The potency has been increasing steadily and the short term effects include euphoria, memory impairment, anxiety and lack of coordination,” she said. “Some users experience psychosis as this new strength is hallucinogenic. Long-term effects can include permanent loss of IQ especially among the young. Public perception of the risks has declined while the actual risks have climbed. Drug prevention is best accomplished by drug education using factual, scientific information.”