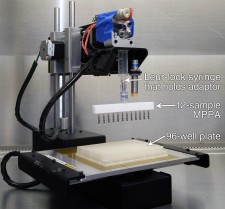 College Station, Texas, July 27, 2016 (Newswire.com) - Researchers at AI Biosciences, Inc. have repurposed 3D printers into machines capable of performing sample preparation and DNA amplification. They have recently published their results in PLOS ONE, an open-access journal.

Almost all molecular diagnostic protocols require a sample preparation step. However, commercial sample preparation instruments can cost $10,000 to $15,000 each, impeding their ability to be employed in limited-resource regions.  While using a 3D printer for prototyping, Season Wong, the company’s co-founder, realized that 3D printers have the components needed to carry out automated nucleic acid extraction and DNA amplification at a fraction of the cost of a commercial instrument. The researchers have been working with entry level printers in the price range of $450-700.

Conversion of the 3D printer consists of replacing the 3D printer’s extruder with a 3D printed magnetic particle processing attachment (MPPA) designed by the company. The MPPA allows the 3D printer to hold a disposable tip comb.

“From there we can control the motors and heaters by feeding G-codes into the 3D printer,” Wong said. G-code is the computer language used in 3D printers to control its motors’ positions and other functions. By writing custom programs, the 3D printer can be programmed to mimic the actions of a sample preparation device.

So far, the modified printer can process up to 12 samples simultaneously in under 13 minutes for nucleic acid extraction.  Furthermore, the team has demonstrated that the DNA extraction efficiency of the 3D printer is on par with the gold-standard spin-column method.

A demonstration of the 3D printer-turned-sample preparation device can be found in the following video.

Most entry-level 3D printers have one or two heating elements, one at the extruder, and the second at the heated bed. After successfully using the modified 3D printer for DNA extraction, the company tested the 3D printer’s capability to amplify DNA.

“Testing the maximum allowed temperatures by the extruder and heated bed confirmed that the heaters can be used for sample incubation, isothermal DNA amplification, and even polymerase chain reaction (PCR) thermal cycling,” said Kamfai Chan, a scientist at the company. “We can maintain the temperature of the heated bed at over 90°C to denature DNA, a critical step needed in PCR amplification of nucleic acids,” Chan said.

To validate the performance of the device, Wong traveled to meet with collaborator Charlotte Gaydos, a professor from the Division of Infectious Diseases at Johns Hopkins University who is also the director of the Center for Point-of-Care Tests for Sexually Transmitted Diseases at the university.

“We packed two 3D printers in regular luggage and brought them to Professor Gaydos’ laboratory, where we successfully used the 3D printers to demonstrate extraction and PCR amplification of Chlamydia trachomatis DNA from urine samples,” Wong said. “In the PLOS One paper, we also presented the extraction of dengue samples because we wanted to demonstrate that both DNA and RNA based extraction are feasible with our setup,” he added.

The researchers believe that the ability to convert a low-cost 3D printer into a sample preparation and PCR device opens up opportunities for diagnostics of infectious diseases in resource-limited settings. Moving forward, the company is planning to use the 3D printer to demonstrate the rapid detection for other infectious diseases and also hope to use this technology to advance STEM education in schools. Wong noted that his company has also developed very low-cost and rapid thermal cyclers that use thermoses for nucleic acid amplification and they can include building these Thermos Thermal Cyclers as part of the STEM project .

“Currently, many STEM projects are limited to exposing students to one or two subjects simultaneously. We believe our approach will enable students to learn and apply different subjects like programming, CAD drawing, molecular biology, math, and physics at the same time,” Wong said. “The conversion is completely reversible, so these 3D printers do not lose their printing functionality.  If the schools already have 3D printers, it won’t cost them too much to implement a curriculum using our approach,” he also emphasized.

AI Biosciences, Inc., based in College Station, TX, is an early-stage company that develops rapid, low-cost, and simple-to-use technologies that will enable point-of-care (POC) diagnostics with high sensitivity and specificity.