McManus to be promoted from Senior Art Director to strategic leadership role with expanded responsibilities. 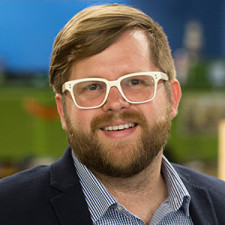 LOS ANGELES, January 10, 2022 (Newswire.com) - Thinkwell's leadership team announced today the promotion of Jason McManus to the title of Principal. With nearly 20 years of experience in the themed entertainment industry and more than five years at Thinkwell, Jason has both led and collaborated on some of the world's most premier entertainment projects in his prior role as Senior Creative and Art Director.

As one of Thinkwell's Principals, Jason will serve in a key leadership role for the company's production teams, acting across three areas to guide creative and production leadership, strengthen company culture, and build strategic relationships for the global organization.

The designation of Principal is reserved for Thinkwell's leaders who are industry professionals that have built a robust career within the company and the industry, and who have shown exceptional leadership qualities, subject matter expertise, and superior client rapport.

"Jason's creative drive, proactive client focus, and collaborative innovation is apparent in his work, and his industry expertise is recognized by peers and clients alike," says Craig Hanna, Chief Creative Officer and one of the owners of Thinkwell. Jason was voted one of 2020's Blooloop Top 50 Theme Park Influencers, and he has led the development of recent global and award-winning projects, including Universal Orlando's Cinematic Celebration nighttime spectacular and its Marathon of Mayhem show extensions at Universal Studios Florida; the Manchester City Stadium Tour in Manchester, England; SEVEN Entertainment Developments within the KSA, and numerous other international and domestic projects.

"Jason's dedication to Thinkwell's projects and internal team development has only grown during the pandemic, and his commitment to Thinkwell's values and goals has made him a valued company leader," notes Tyler Rinehart, VP of Production for Thinkwell. "The passion he shares within his project teams and his strategic approach to finding and nurturing new business partnerships has helped push us forward. We are excited to have Jason in this new role as his influence in future projects and collaboration with our clients continues to evolve."

Prior to working for Thinkwell, Jason worked in creative leadership roles within Walt Disney Imagineering and other experiential design firms and currently teaches themed entertainment design at California Institute of the Arts (CalArts).

Thinkwell is a global design and production agency that creates custom, content-driven experiences for companies and brands in the physical world.