NASA's recent groundbreaking discovery of the Trappist-1 solar system inspired the team at Xeric to design this otherworldly timepiece. 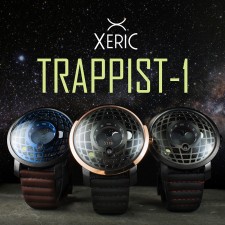 SAN FRANCISCO, October 28, 2017 (Newswire.com) - ​NASA’s recent groundbreaking discovery of the Trappist-1 solar system inspired the team at Xeric to imagine what a journey to these newly found planets might be like. The Xeric Trappist-1 Moonphase watch pays tribute to this new planetary system of seven planets resembling our own, located 12 parsecs (39 light years) away from us and orbiting a red dwarf star slightly larger than Jupiter.

Several key features of the Xeric Trappist-1 Moonphase watch set it apart from other traditional watch designs. The large Cupola grille floating over the dial provides a window into the depths of space and time as distant planets slowly come into view amongst the star-riddled void. Two Super-LumiNova™ planets indicate hours and minutes on the dial, and the center viewing window shows the current moon phase. The watch features a domed crystal made from Hesalite, a material that was initially developed for NASA. Hesalite is still used for watch crystals on all space missions due to its rigidity and durability even in the harshest environments of space. Additionally, the straps are made from U.S. Horween leather and the ridges are modeled after texturized space gloves. Each colorway will be limited to 2017 pieces and each watch will be individually numbered.

"We can not look out into space without looking back into time."

During observation of the Trappist-1 planetary system, researchers found that these new worlds were within a habitable zone where liquid water and even plant life may be present. Traveling to these planets may still be a long way off, but that doesn’t prevent us from dreaming up the perfect watch about the journey: the Xeric Trappist-1 Moonphase.

Xeric was started from a passion to push the boundaries of design and create unique, yet affordable time machines —  watches like you've never seen before. Xeric is one of the most successful watch brands on Kickstarter. We started out as watch collectors, and it's our passion to create unexpected timepieces.

The team behind Xeric is also responsible for Watches.com (formerly Watchismo). Xeric was founded by brothers Mitch & Andrew Greenblatt who are modern horological enthusiasts with a passion for unique timepieces. They've been scouring the globe since 1999 discovering obscure, unusual brands that you've probably never heard of as well as carefully curating the brands you love. A watch is a unique form of art, design and personal expression. They have a long-standing mission of providing exceptional and affordable timepieces to adventurous enthusiasts.

Earlier this year, NASA announced the discovery of a new solar system with multiple planets orbiting the ‘Goldilocks Zone,’ the distance from a star that is neither too hot or too cold to support liquid water like here on Earth.

A rush of adrenaline hit me with the first real evidence of a (relatively) close solar system with not just one, but up to seven planets capable of supporting life as we know it (or possibly, NOT as we know it).

My interests in design, astronomy, and timekeeping have led me to design the Trappist-1 collection of Xeric watches. My first watch design that touches upon the questions, ‘What exactly is Time?’ and ‘What is in our future?’ Will Elon Musk really colonize Mars in the next seven years as promised? If so, how many generations away are we from colonizing other planetary system like the Trappist-1? I feel it will be a lot sooner than we expect. Just look at the dizzying pace of technology in the past 50 or 100 years, both merely a blip of time. Travel to the Trappist-1 planets or another even closer, yet undiscovered solar system might only be decades away.

Accentuating the watch design, I looked to Optical Art pioneer Victor Vasarely and his iconic paintings that transform two-dimensional canvases into mesmerizing illusions personifying the space-age aesthetic of the time-defining 1960s. A print of his Vega series has hung on my cork idea wall for years now, and the image finally spoke to me and how it could bridge the myriad of interpretations in a watch like the Trappist-1.

The spatial depths Vasarely created also reference Einstein’s theory of relativity which can help visualize space and time as a fabric that wraps around massive planets and stars. I wanted to use this forced perspective into a fully dimensional convex, easily translated to a 12-hour display. Time is revealed simply with planetary spheres and stars in glowing colors of Super-LumiNova beneath the Cupola style windows of the grille. This observatory display simultaneously gives you the feeling of looking out while also looking in.

The centrally mounted moon display glows with the current lunar phase ranging from new moon to full moon. This moon phase is surrounded by an alternative time display of traditional Roman numerals highlighted by an orbiting North Star indicator. A magnifying porthole lens shows the date amidst the deepest depth of the ombré colored dial.

Carl Sagan summed it up best when he said “space & time are intertwined. We cannot look out into space without looking back into time.” 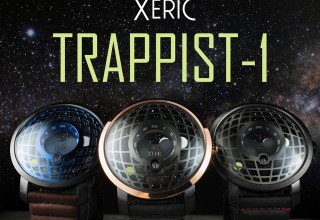 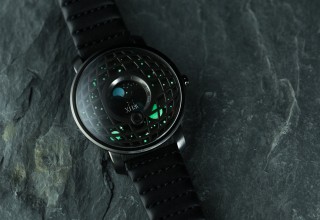 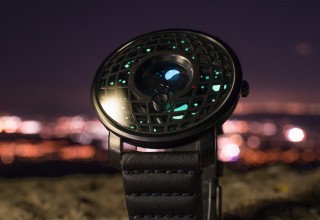 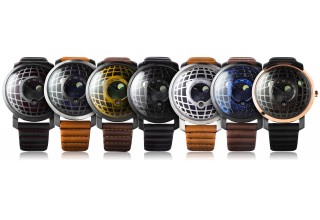