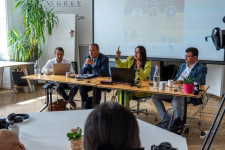 GENEVA, June 27, 2022 (Newswire.com) - Gathering on the sidelines of the 50th session of the United Nations Human Rights Council (UNHRC), the Yemen Coalition of Independent Women and its partner organizations, including The Washington Outsider, held a series of seminars on human rights abuses by the Iran-backed Houthis against children and women. The Washington Outsider's Editor-in-Chief, Irina Tsukerman, participated in these events.

Wesam Basindowah, the founder of the Coalition, stressed the need to protect children by specialized international organizations such as the UNICEF. Basindowah recalled the tragedy of the girl Lian, who was killed with a ballistic missile along with her father in the city of Ma'rib last year, considering that this tragedy epitomizes the situation of children in Yemen.

According to Mansour Al-Shadadi, who represented one of the other participating European NGOs, half of all militia fighters are child soldiers who are recruited through manipulation of their families, in exchange for money, or through coercion.

Al-Shadadi considered the control of the extremist wing of the Houthi group over the Ministry of Education as a major reason for the process of recruiting children and facilitating their radicalization.

He also considered the economic effects of the war on families and the attempt to attract children from poor and uneducated families through food baskets provided by international organizations and seized by group supervisors as another major reason for recruitment.

According to statistics cited by another panelist, Dr. Mosali Buhaibah, nearly half a million children were accommodated in 6000 Houthi summer centers, which was confirmed by senior officials in the group, where they are trained to fight and to adopt sectarian curricula.

The head of the Coordination of Associations and People for Freedom of Belief, Thierry Valle, said that 10,000 children killed or maimed since the fighting began in March 2015. That equates to four children a day.

According to a statistic, Thierry Valli said, "450 children were killed or wounded in the city of Taiz during the past six years, and the Houthis deliberately targeted them with snipers."

Thierry Valli reported the case of the 8-year-old girl, Ruwaida Saleh, who was shot in the head in August 2020 while collecting water in the Kalba district of Taiz, stressing that it is an example of Houthi deliberate sniping of children.

He also reported the story of the 10-year-old child, Saber, who was killed in 2020 by a sniper's bullet while he was with his brother, to fetch water for his family.

In another seminar in the series, European Union Council International Affairs Advisor Dr. Manal al-Muslimi said that women in Yemen are the most vulnerable and not only lack their basic rights, but also lack individual freedoms. Houthis have long targeted, arrested, harassed, imprisoned, and tortured women mainly journalists, human rights activists, political figures and influential women leaders, such as Yemeni model Intisar al-Hammadi.