The Ultimate Hate Crime Inspires a Movement of Tolerance 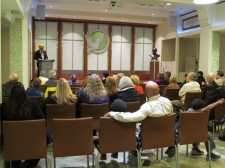 SACRAMENTO, Calif., December 14, 2017 (Newswire.com) - A celebration of International Human Rights Day December 10 at the Church of Scientology of Sacramento began with a screening of the documentary Waking in Oak Creek. The film tells the story of a small suburban town in Wisconsin where six worshippers at a Sikh Temple were gunned down by a white supremacist.

Shocked by this violence, the people of Oak Creek came together to support the Sikhs and create a safe community for all.

The key to tolerance is understanding, said Reverend Kay Alice Daly of the Church of Scientology, who introduced keynote speaker Darshan Mundy, Public Affairs Director of the Sikh Temple in West Sacramento. To provide greater understanding of the Sikh community, Mr. Mundy gave a presentation about the beliefs and values of his religion: the sanctifying of life, family, respect for religious freedom, and the tradition of standing up for others’ rights to freely practice their faith.

Church of Scientology Sacramento Public Affairs Director Mike Klagenberg spoke of the Universal Declaration of Human Rights. Adopted by the United Nations Dec. 10, 1948, its anniversary is commemorated by International Human Rights Day. He shared a story of how human rights education is an effective deterrent to intolerance and hate.

“Imagine if you will a quiet third-grader taking a special class on how prejudice and discrimination begin.” In that class, the child learned the definition of “stereotypes” and “epithets.” And from that day forward he remembered that lesson. Whenever he read or heard a stereotype or epithet he ignored it, recognizing it as an attempt to bring about prejudice and discrimination against the person or thing mentioned.

“Fast forward 52 years and you find that third-grader standing in front of you today, sharing this story,” Klagenberg said. That class took place the year that Dr. Martin Luther King Jr. led the march from Selma to Montgomery, Alabama — a time when human rights education programs first began appearing in schools.

Klagenberg introduced those attending the event to the human rights education campaign supported by the Church of Scientology: United For Human Rights and its program for young people, Youth For Human Rights, whose materials have been used in some 38,000 schools to educate students of all ages on the Universal Declaration of Human Rights.

These programs were inspired by the vision of Scientology Founder L. Ron Hubbard who called on all Scientologists “to support true humanitarian endeavors in the fields of human rights.”

This year, leading up to the 70th anniversary of the Universal Declaration of Human Rights, Klagenberg wants to see human rights education made mandatory in all schools.

Scientologists on five continents engage in collaborative efforts with government agencies and nongovernmental organizations to bring about broad-scale awareness and implementation of the Universal Declaration of Human Rights, the world’s premier human rights document.

To learn more about this program, visit the Scientology website.