The Truth About Drugs Booklets Are a "Lifesaver"

Kern County Drug-Free World Coordinator says not telling your kids the truth about marijuana is a big mistake. 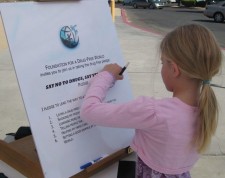 Ridgecrest, California, November 9, 2016 (Newswire.com) - “The constant bad news about the meth and heroin epidemics tends to overshadow the need to educate kids about marijuana,” says Kern County Foundations for a Drug-Free World Coordinator Vicki Rizzardini, “but that’s a big mistake.”

Rizzardini, a businesswoman from Ridgecrest, Calilfornia, has made sure families throughout her town have copies of The Truth About Drugs booklets and she wants to provide every family in Kern County with this vital information.

“I was concerned to learn that marijuana use has been escalating in the region so I want to make sure local families have what they need to help their kids,” she says.

Rizzardini says it is very important for parents to know that today’s marijuana is not the same as it was in the 60s. The Drug-Free World The Truth About Marijuana booklet explains why:

“The chemical that causes intoxication of the ‘high’ in users is called THC (short for tetrahydrocannabinol). THC creates the mind-altering effects that classify marijuana as a ‘drug’.”

It goes on to state:

Several years ago, Rizzardini brought The Truth About Drugs materials to the Randsburg Old West Days. People came to her booth to let her know they still had the booklets they got from her and have used them with their children and grandkids.

“One woman told me she had been a drug addict and she was worried about her 12-year-old and wanted to make sure he didn’t go down that same road,” says Rizzardini. “She was so glad to have the materials for him. She said they are a lifesaver.”

The Foundation for a Drug-Free World is one of the world’s largest nongovernmental drug education programs. Supported by the Church of Scientology, it empowers youth and adults with the straight facts so they can make informed decisions to live drug-free.

The Foundation surveyed teens to find out why they started using drugs in the first place and “55 percent replied it was due to pressure from their friends. They wanted to be cool and popular.”

“This is why The Truth About Drugs materials are so important,” says Rizzardini. “So much of the program is kids talking to kids.”

Young people connect with the public service announcements, she says, and in The Truth About Drugs—Real People, Real Stories documentary, former addicts tell what life was really like on drugs. Nearly every one of them says that if anyone had told them what would happen to them, they would never have tried drugs in the first place.

“Most drug education booklets cost from 50 cents to a dollar a piece,” says Rizzardini. “I’ve passed out thousands of copies of these booklets. I would never have been able to do that without the help of the Foundation and the Church of Scientology.”

Anyone wishing to get copies of these materials should visit the website at www.drugfreeworld.org and order them free of charge. The Foundation will also arrange training for teachers, parents and community groups and provide any other needed support.