The global airline's topping the list for the best kids freebees are Aeroflot, Saudi Arabian, Lufthansa, Qatar, Air Astana and Singapore who were all shortlisted in the TravelPlus Airline Amenity Bag Awards 2015 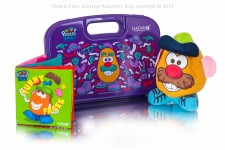 London, UK, May 5, 2016 (Newswire.com) - With more and more seats being occupied by children airlines recognise the importance of investing part of their marketing budget on young travellers. Airlines understand that making children happy and occupying them during the flight has value.

They realize it’s intelligent to invest money in airline branding. Even though children now bring their iPads with them and have the opportunity to watch movies onboard, they still expect more.

Children still get excited when they receive a gift on-board and you never get too old for that!  It leaves all of us the feeling that you’re really welcome and are being specially treated!” journey and have a use and value long after landing

The global airline’s topping the list for the best kids freebees are Aeroflot, Saudi Arabian, Lufthansa, Qatar, Air Astana and Singapore who were all shortlisted in the TravelPlus Airline Amenity Bag Awards 2015

Partnering with Hasbro Gaming a world leader in toys and games the young traveller is gifted goodies based on Monopoly, Twister and Guess Who. Qatar’s activity kits are tech-friendly and educational, including glow-in-the-dark carry cases, dry-eraser bags, and also feature multiple games

The 2015 Awards introduction of the baby kit category showcased the newest development in airline’s amenity kits. Containing travel essentials for all parents travelling with their most precious cargo, they feel as much as a gift to parents, as an amenity for the children. They are a thoughtful gesture from airlines that understand the stresses of travelling with very young children.

This reusable baby kit from Air France is offered to families travelling with babies under the age of two and contains a nappy, bib, child size spoon, Nivea wipes and moisturizer and yes a cuddly toy

Images are available to download at the following link https://www.dropbox.com/sh/co64gl17g8t64wp/AACHBmTqRBfVwf48fEOYYUhYa?dl=0

About the Awards: The TravelPlus Airline Amenity Bag Awards Ceremony was held on the evening of 5th April 2016 at the Radisson Blu Hotel, Hamburg and attended by over one hundred VIP guests form the airline industry. The TravelPlus Airline Amenity Bag Awards are the only independent global industry event celebrating excellence in Airline Amenity Kits, Sleeper Suits and Children’s Goody Bags. The Awards are open to all global airlines operating both scheduled and non-scheduled services, internationally or domestically, as well as organizations suppliers and designers of airline amenities. Importantly the Awards are not aligned to any association or Guild, and as such are a true barometer of the trends within the Onboard Amenity Sector.

Judged by passenger focus groups, with those involved having the relative travel experience for the categories they evaluate. TravelPlus believe that using smaller judging panels of experienced travellers, ensures that the Amenity Bag Awards remain fair and impartial, and keep the most important perspective at their root, that of the passenger.

The 2015 awards received over 100 entries from over 40 of the world airlines and judged in 14 categories including Private Jet, First and Business Class, Overnight Kits, Children’s Goody Bags and Sleeper Suits. (A full list of categories is available on request)

TravelPlus Media was established in 2002 and has since become a boutique representation and marketing consultancy. In addition to working with client TravelPlus Media owns and manages the TravelPlus Airline Amenity Bag Awards and publishes Amenities