The Blockchain Research Institute, the world's leading blockchain think-tank, has added The Telos Foundation to its membership roster 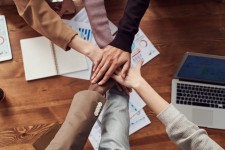 LONDON, February 14, 2020 (Newswire.com) - The Telos Foundation is joining the Blockchain Research Institute in an effort to further its mission to bring blockchain to the masses.

The Blockchain Research Institute (BRI) is a brain trust of individuals, organizations, and researchers from a wide range of fields that have come together to identify industries where blockchain technology could be of use. The research focus spans 10 primary categories including financial services, healthcare, energy & power, and manufacturing. In a press release, Blockchain Research Institute co-founder and Executive Chairman Don Tapscott said, "These new members, all of whom are global leaders in their industries, will help guide our research and strengthen the membership network as a whole."

By joining the BRI, the Telos Foundation hopes to contribute practical ideas on how to incorporate blockchain technology into everyday processes. Says Suvi Rinkinen, CEO of The Telos Foundation, "For the Telos Foundation, joining BRI was a natural extension of our mission to support purpose-driven blockchain projects. At this early stage of user adoption of distributed-ledger tech, we think it's vital to share information with peers and to learn from them whenever possible so we can build a sustainable future together. BRI is clearly a great venue to do that."

The Telos Foundation is a Decentralized Autonomous Organization established as a promotional and funding body to advance the Telos Blockchain Network and provide support to network applications that may not otherwise attract the funding they deserve.

Ecoin Begins Migration of 1.5 Million Users to the Telos Network
Ecoin sets sights on reaching 100 million users, moves to Telos for its leading ease of use, performance and scalability.
Telos Foundation - Apr 27, 2020

Telos and BlockBastards to Bring Unity Games to the Blockchain
New platform Qudo will allow games made with Unity to easily offer token rewards to players and developers.
Telos Foundation - Apr 22, 2020