The Rose Group Raises $16M for Neighborhood Charities Since 2010 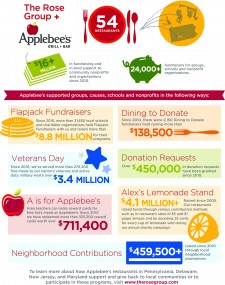 NEWTOWN, Pa., February 25, 2020 (Newswire.com) - The Rose Group, a leading franchisee of Applebee’s Neighborhood Grill + Bar™, announced today that it has raised an impressive $16 million for various charities throughout Maryland, Delaware, Pennsylvania and New Jersey since 2010.

“We are a company that has always been focused on making a positive impact on the communities we serve. There is no better way to get to know and engage with our neighbors than bringing everyone together for a good cause,” said Jeff Warden, CEO of The Rose Group. “We take immense pride in Doin’ Good in the Neighborhood℠ year-round.”

In their combined markets of greater Philadelphia, Lehigh Valley, Wilkes Barre/Scranton, greater Baltimore and the Eastern Shore of Maryland and Delaware, 54 Applebee’s locations raised a combined total of more than $16M through programs including Flapjack Fundraisers, Dining to Donate, free Veterans Day meals, “A” is for Applebee’s, donation requests and local neighborhood promotions.

In addition to supporting a wide variety of charitable organizations, a large portion of The Rose Group’s fundraising efforts supports Alex’s Lemonade Stand Foundation (ALSF). For 16 years, The Rose Group’s Applebee’s restaurants have organized and participated in local events with the sole purpose of raising money to help fund ALSF’s childhood cancer research and family support programs, raising a collective total of over $4.1 million.

Late last year, The Rose Group was awarded the Spirit of Franchising Award from the International Franchise Association (IFA) which recognizes charitable or community support programs that “embody the spirit of giving back to his or her local community” and in late January they were awarded the Pennsylvania Restaurant Neighbor Award for the eighth time in fifteen years. “From the moment The Rose Group opened its doors in 1985, we’ve made it a priority to give back. I couldn’t be prouder of what our team members have accomplished over the years,” said Warden.

About The Rose Group

The Rose Group, headquartered in Newtown, PA, is the 74th largest restaurant franchise company in the United States. They currently own and operate 54 Applebee’s Neighborhood Grill and Bar restaurants in Eastern Pennsylvania, Maryland, New Jersey and Delaware. The Rose Group also co-owns and operates two Shannon Rose restaurants, an independent Irish pub and restaurant in North Jersey. More information on The Rose Group can be found on their website at www.therosegroup.com.