The Praetorian Group's PAX Coin is the First Cryptocurrency ICO to File With the U.S. Securities & Exchange Commission

The Praetorian Group has officially filed for registration of the PAX coin with the U.S. Securities & Exchange Commission (SEC). 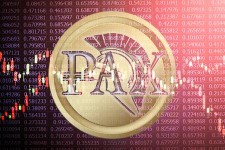 NEW YORK, March 12, 2018 (Newswire.com) - The Praetorian Group and PAX coin, cryptocurrency’s first sound money crypto, has filed its S-1 registration statement with the United States Securities Exchange Commission ("SEC"). The Praetorian Group's actions to file the SEC form S-1 marks a historic moment in both the cryptocurrency and securities industries as the company’s filing is the first of its kind. For over a year the SEC has commented about the Initial Coin Offering ("ICO") phenomenon but has avoided directly making or creating regulations in the ICO space. Seeking to become the "Gold Standard" in the cryptocurrency space, The Praetorian Group decided to raise the bar on the ICO industry and file a registration statement with the SEC as shown on https://www.sec.gov/Archives/edgar/data/1721980/000137647418000045/pr_s1.htm to ensure complete transparency and investor protections afforded to those who comply with the securities laws in the United States.

The Praetorian Group is billed as the first-ever Cryptocurrency Real Estate Investment Vehicle or (C.R.E.I.V.) whose currency will have a direct link to the property that the company acquires. This means each PAX Coin will be linked to a property in New York, one of the most lucrative real estate markets in the world. In Phase 1 of the project, The Praetorian group will seek out promising real estate properties in New York and other parts of the United States. Once the Real Estate portfolio is satisfactory to the company, the company will develop the software required to support their mission to bring The PAX token to the masses. A software application that will support the top 50-100 cryptocurrencies as valued by market cap and make those cryptocurrencies spendable through their PAX Universal Debit Card.

"We could not be more excited to have submitted our filing and work with the SEC through the comment period to have our ICO registered and available to the general public," said Gerard Marrone, Co-Founder and CEO of The Praetorian Group. He continued, "Both of the founders of this company are lawyers and know the importance of doing things in full transparency and compliance with the law."

The registration has been filed and is presently pending SEC approval. The company is holding a private round of investment for the development of the PAX Coin. The token presale in the U.S. will be held once it is registered as a security with the SEC and an overseas round this spring.

Ultimately the "PAX Token," the Praetorian Group’s cryptocurrency, will become the bar by which all other cryptocurrencies will be measured in the space upon SEC approval. Adimando went on to say, "There is plenty of room in cryptocurrency for many cryptos and companies, but the key is to have some foundation to build your company upon. Everyone knows Bitcoin, but a lot of people lose confidence in the token when they come to know that it is a pseudo-fiat currency. When people see there is nothing behind the coin other than the blockchain, they begin to see too much of a similarity to government fiats and walk away. The Praetorian Group’s PAX token is unlike any other crypto coin because we are building its value on the greatest wealth engine in history, Real Property."

The Praetorian Group plans to work through the comment period with the SEC to ensure the company is registered with the regulatory agency and can conduct an ICO in the Spring of 2018. Raising the bar on the industry is an exciting proposition and brings a new level of credibility, maturity and stability to the cryptocurrency and ICO space. To learn more about this exciting company and subsequent S-1 filing with the SEC, you can visit www.praetoriangroup.io.

About The Praetorian Group

About The Praetorian Group

The Praetorian Group's team has a vast knowledge of cryptocurrency, blockchain technology, banking & finance, AI, marketing and business operations. Our group of highly skilled visionaries is poised to bring the revolution in cryptocurrency.