The movement urges officials to see the film and send a message to Congress to support legislation to keep vapor products on the market. 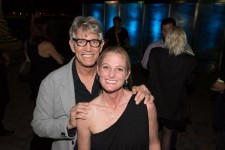 Hollywood, CA, October 26, 2016 (Newswire.com) - The national movement Hands for a Billion Lives was nationally recognized on Saturday, October 22, when thousands of participants in cities across the country as well as countries abroad, joined hands at precisely 2:22 p.m. local time, to symbolize a protective barrier to protect the billion lives estimated to die because of smoking-related disease this century. Hands for a Billion Lives supports federal legislation that will keep vapor products on the market. Thousands of vapers joined hands to bring awareness to the award-winning documentary “A Billion Lives,” which sparked this movement.

Hands for a Billion Lives was joined by Matt Bradley of ‘The Deadliest Catch’ and actor Eric Roberts who said, “As a smoker for nearly 30 years, I am so pleased to finally be part of the solution. ‘The Billion Lives’ movie brings to the foreground, the profound importance of this movement. "The hands" ceremony was a gloriously fitting tribute to the memory of the lives lost, and the spirit of the lives that will be saved by this worthwhile mission. I am honored to have played a small role, in something so meaningful."

The World Health Organization projects that a billion people will die early this century from smoking. The movie notes that while new technologies evolved to help addicted smokers, money has corrupted the government departments and nonprofit organizations responsible for helping to fix the problem. To uncover the truth, director Aaron Biebert traveled across four continents to create the documentary.

In April 2016, The Royal College of Physicians released a study that stated electronic cigarettes are 95 percent less harmful than tobacco cigarettes. In August 2016, the Food & Drug Administration started regulating the vaping industry, and only those who go through a lengthy and costly approval process, will survive. The new regulatory landscape set forth by the FDA has created an enormously cost-prohibitive environment for manufacturers to market their products to adult smokers and vapers and will largely hand the market over to only large manufacturers, such as big tobacco. These small businesses provide an aspect that the FDA has ignored, the support and education needed to remain successful, and if closed down, potentially millions of adult vapers will return to smoking and thousands of small businesses will be shut down, putting an estimated 37,000 to 57,000 employees out of work.

“We hope the movie and the national movement will send an important message to Congress to consider how their unnecessary imposed regulations could do further harm to those who are using these products as an alternative for harm reduction,” says Schell Hammel, the organizer of Hands for a Billion Lives. “This is bigger than any one of us. This is about lives that will be lost if these regulations go through as written and Congress does not change the predicate date in the Tobacco Control Act.”

“A Billion Lives” has already debuted in other countries and on October 26th at 6:30pm, the movie makes its Hollywood premiere at the famous Cinerama Dome Theatre on Sunset Blvd. It will continue to play regularly at Laemmle Music Hall four times a day for a full week from October 28th through at least November 4th. For more information, visit ABillionLives.com.

About Hands for a Billion Lives

Hands for a Billion Lives is a national campaign to encourage everyone – vapers, smokers, non-smokers and non-vapers, as well as elected officials – to see the film “A Billion Lives” and support federal legislation that will keep vapor products on the market. To learn more and join the movement, visit HandsforaBillionLives.com.

Source: Hands For A Billion Lives

This is a nationwide movement that will continue and continues to happen nationally as well as globally to emphasize the importance of the movie "A Billion Lives" as it highlights the corruption and the deaths that could follow if ignored.