The Model Breaking the Fashion Mold Takes Over NYFW Again.

Madeline Stuart, the first professional adult model with Down Syndrome walks in her third season of NYFW. 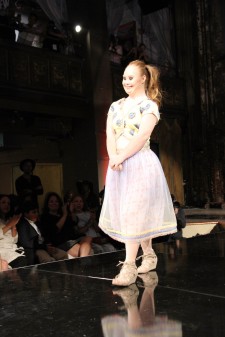 New York, NY, September 29, 2016 (Newswire.com) - Returning to NY for her third season, Madeline Stuart made strides on the Runways for SS17 that continues to break and defy the mold in the fashion and entertainment industry.

On her tour through America, besides the Catwalk, Madeline made appearances at the Ohio Buddy Walk, Birmingham Fashion Week, San Francisco Love without Words Fashion Show, and the Boston Fashion Show for Veterans.

The smile and giddy spirits of fans that spot Maddy on the streets, asking for a photo and thanking her for her inspiration, is without measure. Maddy embraces and supports her fans just as much as they adore her.

Madeline not only was an invited guest during NYFW, sitting among friends - Kelly Osborne, Bonang Matheba, Derek Warburton, and Victor Cruz, she also walked in five shows for Style Fashion Week and Art Hearts Fashion Week.

Onlookers go wild with excitement every time Madeline makes an appearance on the Catwalk. Her joyful and spunky spirit coupled with her prestigious walk, melts hearts at every show she walks.

Madeline Stuart is 19 years old and became viral after showing dedication to make it to NY to walk the Runways after losing weight and photos were posted of her success on social media. Almost immediately after Madeline’s photographs went viral, she was pursued by major brands and publications whom were captivated by her beauty, and booked her to model for their campaigns and shows.

Madeline has been featured in leading publications such as Vogue, Cosmopolitan, Paper, Women’s Weekly, New York Times, Elle, Marie Claire, People, and Cleo, to name a few. Currently she is midway through filming a documentary with Swedish award winning  producer Jane Magnusson.

For addition photos and video coverage of Madeline Stuart during NYFW please visit the below Dropbox link.