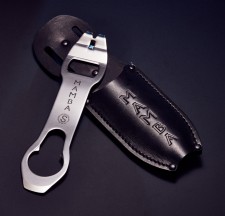 The patent pending Mamba is formed from a solid piece of ceramic tumbled, 304 stainless steel and 100% made & sourced in the United States. Resembling a traditional bar tool but with significantly more style and functionality, it is precision machined to expedite repetitive, sometimes manually challenging bartending tasks.

The can tab lever makes it possible to open a can quickly and with little effort. Similarly, can venting (or “snake biting”) makes faster, less foamy pours. The Mamba’s pour spout remover uses a lever action to easily remove the most stubborn pour spouts without damaging the bottle or spout.

Snake Bite Co launched The Mamba on the popular crowd funding site Kickstarter on June 20th, 2016 for a 38 day campaign. The campaign is looking to raise $5500 USD by July 28th, 2016 and surpassed that goal in less than 12 hours.

Perks include a special Kickstarter price of $22 and free delivery in the U.S. – which reflects over a 20% discount off the MSRP. You can find out more about The Mamba™ on the Kickstarter campaign page and in the media kit via the links below.

Snake Bite Co. is an American manufacturer of quality goods that are 100% sourced and made in the USA. We build products and apparel for the after hours, the happy hours, and the weekend - all the times when you're ready to enjoy life.