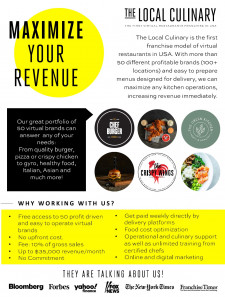 MIAMI, January 11, 2022 (Newswire.com) - As we bid farewell to 2021, The Local Culinary has a reason to celebrate, having wrapped up a very successful year, strengthening its position in the virtual restaurant industry. The company reached thousands of eaters across the country and launched its first international ghost kitchen in Dubai.

According to Alp Franko, founder of The Local Culinary, their growth is attributed to their profitable and low-risk business model that can adapt to local demand.

2022 will be a year filled with great opportunities as The Local Culinary expands into new verticals. A couple of the new projects include serving customers at major airports and room service delivery at exclusive hotels throughout the U.S. Alp Franko explains, "We were selected by new partners, because they believe in our vision and our approach. We are thrilled by the unlimited potential we see in these projects."

Also on the horizon, new openings across the U.S. and international markets (Canada and Europe). "2022 promises to be a year of growth for The Local Culinary. We have received international interest in our ghost kitchen franchise and will be further expanding into new markets," said Franko.

The ghost kitchen market is growing at a fast pace in U.S. and around the globe, and The Local Culinary stands ready to meet those demands.

The Local Culinary is Effective at Channeling the Demand for Home-Delivery Meals to Their Respective Franchisee Kitchens
THE LOCAL CULINARY - Apr 29, 2021