The Karney Law Firm works to promote Motorcycle Safety Awareness Month with their "Look Twice, Save A Life" campaign 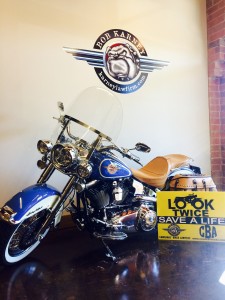 Charlotte, NC, May 15, 2017 (Newswire.com) - The beautiful weather this past week has marked a strong kick-off for the riding season in North Carolina. However, as temperatures rise, so do the number of bikers on the road.

To raise awareness and reduce the rise in Motorcycle deaths in North Carolina, Governor Roy Cooper has declared May “Motorcycle Safety Awareness Month.”

While The N.C. Governor’s Highway Safety Program strongly encourages motorcycle safety, reminding motorists to share the road and watch closely for motorcycles, especially when changing lanes and at intersections, The Karney Law Firm has made it a priority to bring awareness to motorcycle safety as well.

The Karney Law Firm has teamed up with the Charlotte CBA (Concerned Bikers Association) to promote their “Look Twice, Save A Life” campaign.

As Karney Law Firm owner Bob Karney stated, “Having an accident is a biker’s worst nightmare. We ride always concerned about what other drivers are doing on the road. Over half of the fatal motorcycle crashes involve another vehicle, and more often than not the primary fault lies with the four-wheeled driver.”

For over 30 years, Bob Karney has built a reputation for protecting motorcyclists. From accident through recovery, The Karney Law Firm has made itself a mainstay in North Carolina motorcycle law.

Justice Digital is a digital marketing, public relations, and branding firm, dedicated to working exclusively with attorneys and legal professionals. Founded by top attorneys, Justice Digital has the strategy and experience to grow your brand.