SEOUL, South Korea, September 30, 2020 (Newswire.com) - Korea's national competitiveness will rise to the top 10 in the world if it adopts a differentiation strategy.

"Korea's national competitiveness currently ranked 26th in 2020 may rise to 10th place or fall to 38th among 62 countries in the world, depending on the national strategy chosen by the government and businesses." (IPS National Competitiveness Research 2019-2020) This is the result of the "IPS National Competitiveness Research 2019-2020," which was announced simultaneously in Switzerland at 10 a.m. (Central European Time) and Korea at 5 p.m. (Korea Standard Time) on September 24. (see Table 1).

The Meaning of National Competitiveness Ranking and Research Institutions

Of the three institutions that report national competitiveness, International Institute for Management Development (IMD) and World Economic Forum (WEF) in Switzerland announce only one type of rankings, while IPS publishes rankings in three different scenarios, depending on whether the country's government and businesses pursue a differentiation strategy, no strategy, or cost strategy.

IMD is a Swiss business school that views national competitiveness as a good business environment for global companies to invest in. On the other hand, WEF is a research institute that hosts the Davos Forum and views national competitiveness as the industry productivity of individual countries. Therefore, in the IMD 2000 report, Malaysia’s ranking (27th) is higher than that of Japan (34th) among 63 countries as Malaysia has better investment environment than Japan, while Korea ranked 23rd. On the other hand, the WEF 2000 reported that Japan, which was highly productive, ranked 6th among 141 countries, far higher than Malaysia's 27th, while Korea ranked 13th.

The IPS National Competitiveness Report is jointly released by three institutions in Switzerland and South Korea. The UN Institute for Training and Research (UNTAR) in Geneva, Switzerland, the Taylor Institute of Franklin University Switzerland in Lugano, and the Institute for Policy and Strategy on National Competitiveness (IPSNC) have collaborated since this year. Unlike IMD and WEF, which compare only the current conditions of each country, IPS derives the national competitiveness rankings by applying different competitive strategies of the country's government and businesses to the current conditions. Competitive strategies include low cost strategy and differentiation strategy. A low cost strategy refers to a strategy that pursues low cost and low quality, while a differentiation strategy pursues high cost and high quality.

IPS uses the "9-factor model" consisting of four physical factors and four human factors, and a chance event as the theory of determining national competitiveness.

Korea ranked 26th this year when considering only the current situations with no strategy. Specifically, among the physical factors, demand conditions (11th) and related industries (17th) ranked relatively high, business context (32nd) is in the middle, and production conditions (53rd) are low. Among the human factors, entrepreneurs (21st) and professionals (19th) ranked relatively high, politicians and bureaucrats (24th) are in the middle, and workers (44th) are low. (see Figure 1).

Looking at the ranking changes in the eight factors compared to last year, demand conditions (+5), related industries (+3), entrepreneurs (+8), and professionals (+3), which are relatively strong areas, all showed a rise in ranking, while factor conditions (-2) and workers (-24), which are relatively weak areas, all showed a downward trend. Thus, Korea is a country where the areas of strength are strengthened and the areas of weaknesses are weakened. Countries with such competitiveness structure can be very successful when applying a differentiation strategy.

Two efforts must be made for Korea to be included in the top 10 in the future. The first is the physical and human factors. Specifically, Korea should further enhance the competitiveness of demand conditions and related industries among physical factors, and professionals and entrepreneurs among human factors. In particular, in the case of related industries, Korea has a competitive edge in the industrial infrastructure such as transportation and telecommunications, but is relatively behind in living infrastructure, which measures the quality of life. Living infrastructure is an important determinant, especially for attracting multinational corporations and global talents. On the other hand, as for entrepreneurs and professionals, a good social context is required to enable high-quality entrepreneurs and professionals to work efficiently as well as to enhance their personal competences. The second is the choice of national strategy, which requires the government and businesses to adopt a more differentiated strategy. Korea can go up to 10th place if it uses an appropriate differentiation strategy within the current competitive structure. Hence, if Korean combines the improved physical and human factors with an appropriate differentiation strategy, it can be positioned in the higher ranking of the top 10 list.

Professor CHO Dong-sung, a joint researcher (IPS Chairman and Professor Emeritus of Seoul National University) said, "Factors that play an important role in an early stage of a country's economic development are factor conditions and workers, and the appropriate national strategy should be low cost strategies. However, as the national economy matures, key factors and national strategies should change accordingly." He then said, "Although Korea has become an advanced country, it should develop more advanced demand conditions and professionals, and pursue differentiation strategies to further enhance its national competitiveness."

Professor MOON Hwy-chang, a joint researcher (IPSNC Chairman and Professor Emeritus of Seoul National University), mentioned "Many predict that some multinational corporations (MNCs) will leave China and reshore in their home countries due to the COVID-19 pandemic and the ongoing trade war between the United States and China. However, MNCs including Korean firms are diversifying their investments into India and Southeast Asia, generally countries around China. Given such a situation, unless Korea’s domestic business environment improves, not only will Korean MNCs be less likely to make a U-turn, but Korea-based foreign firms will also be increasingly likely to go abroad.” He stressed the importance of attracting investment from MNCs to Korea by improving the business environment for strengthening national competitiveness.​

Changes in the Rankings of the Top 10

Canada, Denmark, and Singapore ranked in the Top 3 of the overall ranking for the 2019-2020 National Competitiveness Research. In particular, Canada topped the list again as it did in the previous year, while the Netherlands and Hong Kong SAR (hereafter Hong Kong) showed a relatively large fluctuation in their rankings compared to other countries. The Netherlands (ranked 7th) jumped up five places to enter the Top 10 this year. This was mainly due to Brexit as a growing number of companies have been shifting their overseas direct investment target from the United Kingdom to the Netherlands, much to its benefit. Hong Kong, on the other hand, dropped by four places and ranked 9th place. Hong Kong's prolonged political protests have dealt a severe blow to its overall economy, leading to a drop from the upper ranking to the middle-low ranking in the Top 10. 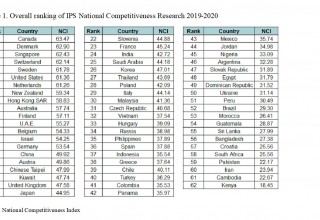 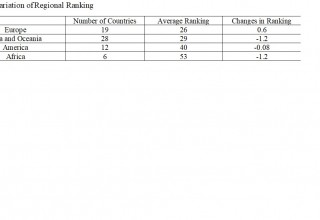 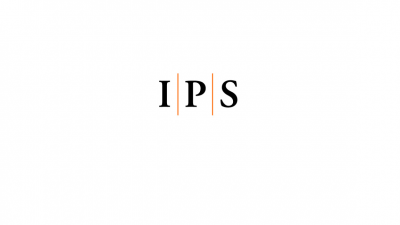