FRESNO, Calif., August 29, 2019 (Newswire.com) - ​​Founder and CEO of The Great American Barbershop Tye Featherstone has quickly made his business a fast-growing franchise with great offerings. Featherstone started his first location on Sommerville and Perrin in 2014. One location quickly turned into three locations throughout Fresno and Clovis. Just last week, Featherstone’s first franchise location opened up in Laguna Hills, California. His next four franchise locations are set to open in Fresno, Clovis, Visalia and Valencia. By the end of this year, there will be eight locations in total. Featherstone took a step further and developed his own branded hair pomades that include a “Clay Matte Pomade” and “Pomade Batch 19,” both formulated by Featherstone and his father. This is the start of his new hair-care line that will also feature other men's grooming products. These products are featured throughout each location, along with The Great American Barbershop exclusive t-shirts that benefit local Children’s Hospitals near every location. For now, the shirts are sold at all Central Valley locations, and proceeds benefit Valley Children’s Hospital. As a father of five, his oldest son spent a few days there and has gone on to the Air Force as a TACP. Tye and many other Valley children have benefited from the care the Children’s Hospital provides. This is their way of giving back.

The Great American Barbershop is garage themed with a classic rock n’ roll style. Specially trained at men’s haircutting, their team gives you a thorough consultation and expert advice on styling tips. Everyone walks out with  a proper hair cut, which includes groomed eyebrows and ears, hot lather back of the neck shave, shoulder massage, style, and a double shot of aftershave. A proper beard trim and the rock n’ roll is always included with every haircut. As classic as the haircuts, barbering is a service that is internet resilient and is something a guy experiences every few weeks. As the sign on the door says, “We Keep It Handsome, So You Don’t Have To.” 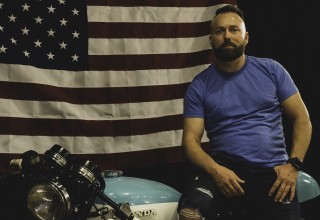 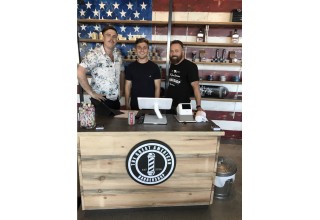 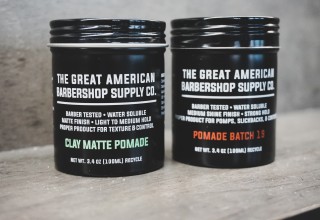