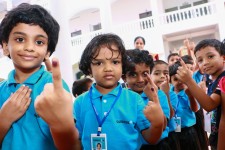 KOTTAYAM, INDIA, August 23, 2016 (Newswire.com) - As the World's largest democracy celebrates its 70th year of Independence, the students of Labour India Public School, Kottayam marched to the polling booth. It was first time ever in Indian History that the Election Commission of India conducted the School Parliament elections directly through its State Wing - an unprecedented event in any of the democratic countries across the World. Students from Nursery to Senior School rehearsed their future democratic right through this pioneering attempt. The indelible ink of democracy is on their left index finger as on the23rd of August, 2016.

Each election is a festive celebration of democracy. The freedom earned by the sacrifices of the previous generations will be sufficiently valued only when the present generation imbibes the true spirit of the democracy. This realisation has led the Election Commission to take the lead in familiarising electoral process amongst the student community and Labour India Public School, Kottayam is honoured to be hosting this path-breaking endeavour. Returning officer, presiding officers and polling officers were selected from the faculty and the election was held for the posts of School President, Head Boy, Head Girl and Sports Captain. There were over 20 contestants competing for these positions. The school ID cards replaced the electoral voter ID cards.

Labour India Public School was founded in 1993 as a residential CBSE affiliated co-educational school based at Marangattupilly near Kottayam, Kerala. The school was in news for many of its pioneering educational initiatives like the first National Plastic Awareness campaign, National Green India-Clean India Drive from Kanyakumari to Kashmir in 2010, participation in Republic Day parade by its NCC cadets and Consecutive National Championships at CBSE athletics. For more details, visit their website: http://www.gurukulam.com/