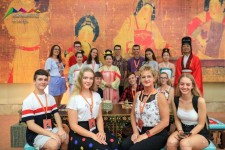 XI'AN, China, September 28, 2019 (Newswire.com) - ​Co-sponsored by the Ministry of Culture and Tourism and the Shaanxi Provincial People's Government and hosted by the Department of Culture and Tourism of Shaanxi Province, the 6th Silk Road International Art Festival was successfully held in Xi'an, Shaanxi from Sept. 7 to the 21st. The festival is the first permanent national comprehensive international art festival related to "One Belt and One Road" initiative that was approved by the State Council, and is held once a year in Shaanxi.

This festival is a cultural fusion of China and other countries, showcasing the cultural prosperity, art exchange, and integration of culture and tourism through cross-language dialogue and cooperation between diverse regions.

A total of 49 shows in a range of genres, including Beijing Opera, Kunqu Opera, Qinqiang Opera, children's drama, symphony, and ballet provided an auditory and visual feast to the global audiences. The original musical Yu Zijun drew inspiration from the true story of an official in Yulin, Shaanxi from the Ming Dynasty and brought the splendid history to life through theatrical stagecraft.

The International Modern Art Week with the theme of "Spirit of the Silk Road, Colors of an Era" displayed over 1,000 outstanding artworks from China and other countries. The Silk Road Tour Season "All The Way Together" presented a series of live performances by more than 100 cast members from 10 countries and regions around the world in cities such as Yan'an and Baoji.

As the festival was held for the first time after the establishment of Department of Culture and Tourism of Shaanxi Province, a Summit Forum on Integration of Culture and Tourism was specially held during the festival of this year. It invited experts from domestic and overseas to make recommendations and explore the path on the development of in-depth integration of culture and tourism in the new era, in order to promote the high-quality development of the tourism and performing art industry.

From 2014 to 2019, the Silk Road International Art Festival has been successfully held six sessions. Its "size effect" is continuously expanded while its international reputation is constantly highlighted. Now the festival has become the key project of the national "One Belt and One Road" initiative and an important platform for promoting foreign cultural exchanges with other countries, making positive contributions to carrying forward the silk road spirit and driving mutual learning among civilizations. In the future, Shaanxi will continue to focus on providing excellent cultural products and services, and strive to develop the Silk Road International Art Festival into an art event with mass international influence and people's satisfaction, so as to build a bridge for communication between different civilizations.