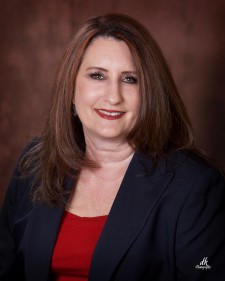 Tomball, Texas, May 22, 2017 (Newswire.com) - The Texas Auctioneers Association held their 60th Anniversary Annual Convention and Championship Contest May 7-9 in Frisco, Texas. During this convention, the Texas Auctioneers Hall of Fame inductee is announced and is not known to anyone except the awards committee.

The 2017 Hall of Fame inductee was Lori Lemons-Campbell of Tomball, Texas. She is the first woman to be inducted into the Texas Auctioneers Hall of Fame and is a 2nd generation auctioneer. She began in the auction industry as a child helping her father, Del Lemons, and mother, Patti Franklin of Groesbeck, TX.  Her father was also awarded into the Hall of Fame in 2009. Lori, her sister Jackie Lemons-Shillingburg and family continue to run their auction business in addition to expanding it to include online auctions and real estate.

Lori is Co-Owner and General Manager in the daily operations of Lemons Auctioneers & Online Pros. She also serves as Co-Owner and President of My Real Estate Expert, LLC., a growing real estate company and an affiliate of Lemons Auctioneers, LLP. Lori’s experience includes the liquidation of assets for major oil companies, exploration companies, business liquidations, banking and lending institutions, small business administration, geophysical companies, cities, counties, learning institutions, real estate and many specialized industries. She is an NAA graduate of the Certified Auctioneers Institute (CAI) of 2010 and a Past President of the Texas Auctioneers Association (2014-2015).  Lori is passionate about working hard to achieve continued growth and success in the Auction Industry. She resides in the Tomball/Magnolia area with her husband, Jeff, of 28 years and enjoys swimming, running, fishing, hunting, and spending time with her family and grandchildren.