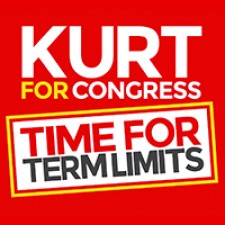 Roswell, GA, February 1, 2017 (Newswire.com) - ​​​Kurt Wilson’s campaign, Kurt for Congress, has issued a Term Limit Pledge and invited all candidates in the likely Special Election to represent Georgia’s 6th Congressional District to sign on too.

Whether you were for or against President Trump, whether you are a Democrat, a Republican, a Libertarian or an Independent, it is important to recognize and celebrate that President Trump's campaign proved the out-of-control political machine in Washington, DC is in fact vulnerable. There is hope. There is real opportunity to break-into a system that has outgrown its purpose and build a modern, representative government.

“Until we eliminate the career being elected to Congress represents and restore pure servanthood to Congress, tackling the onerous Federal Bureaucracy cannot take place,” says Wilson.

In response to broad support for a Constitutional Amendment restructuring the terms of Senators and Representatives and imposing term limits, candidate Kurt Wilson is taking th lead to cause real change in Washington, DC.  Unpopular among the political elite, term limits are a fundamental first step in rebuilding a servant based, responsive government. In October, Rasmussen Reports' national telephone survey finds that 74% of Likely U.S. Voters favor establishing term limits for all members of Congress.

The pledge has been sent to each of the announced candidates seeking to replace Congressman Tom Price in a Special Election when he is confirmed as Secretary of Health and Human Services.

Constituents in Georgia’s Sixth, alongside many Americans, believe Government, including the Legislative Branch, has grown to a self-serving industry of political elite. Lawmakers have lost touch and become unrepresentative to the needs of everyday Americans.

Like you, I am committed to bringing private sector expertise and a compassionate ear to Congress. Eliminating the career opportunity of being elected to Congress presently represents by imposing term limits is one of the highest orders of business for the American People. Term Limits will ensure constituents’ voices are heard and will give genuine servant leaders an opportunity to tackle real issues within real timelines.

I am asking you to sign a Term Limit Pledge to the American People that states that if elected to Congress:

·      I will serve no more than 8-years in the United States House of Representatives;

·      I will forgo the Lifetime Pension afforded to Members of Congress;

·      I nor any member of my immediate family will engage, for compensation, in activities described as “lobbying” of Congress or its Members for the rest of our/their natural lives; and,

·      I will advocate for a Constitutional Amendment restructuring the Terms for Representatives and Senators and imposing Term Limits on the same.

Making America greater is about restoring a representative government where bold action can be taken to end onerous bureaucracy and timely respond to its people’s needs. Together, we can restore function in the legislative branch and confidence in the American people.