Teresa Heaver is Giving Samoyeds the Beginning They Need at Kabeara 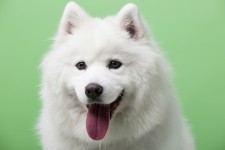 Lockport, Illinois, July 18, 2017 (Newswire.com) - A six-thousand square foot property with two floors in Lockport, Illinois houses hundreds of Samoyed puppies. The breathtaking facility is quite the sight to behold, having been designed to provide the snow-white dogs with all of the care they need while also giving them the room they require to run, play, grow and live happily while they prepare to be taken to their “forever homes”.

In fact, Kabeara Kennels have been devoted to raising the breed for more than three decades, and it’s thanks to their own unique blend of experience and love that such an incredible residence was built.

The business’ owner, Teresa Heaver, is no stranger to the Samoyed breed. Having fallen in love with them in the early 1980’s, she would soon find herself breeding the puppies and found the experience fascinating.

Samoyeds – also known as Nemetskaya Laika, Samoiedskaya Sobaka, or Bjelkier—are particularly unique thanks to their history, which dates back more than one hundred years. Before becoming commonplace in U.S. households as domesticated pets, they have often used in Antarctic expeditions thanks to their hardiness in brutal weather conditions, and their fondness for their human companions.

In fact, the vast majority of Samoyeds now living in a home across the states are actually descended either from those used for expeditions or from Russian imports.

They’re also one of the oldest dog breeds in the world; among fourteen ancient breeds which can trace their genetic footprints to wolves, the Samoyeds are one of them. Nowadays, they will typically grow to be between a max of twenty-one and twenty-four inches (for male and female Samoyeds, respectively).

The breed is particularly fond of colder weather climates due to the temperatures and snow which have commonly been present in their natural habitats; they’re much more likely to become energetic during milder periods, and will often keep their owners bemused when they refuse to come home at such times.

However, it’s worth remembering that they are hunters by nature, and will often see smaller animals as prey. In fact, many Samoyed owners will find themselves having to force their dogs to stay put when they suddenly notice a cat or particularly small canines.

Teresa Heaver fully understands the unique needs of the dog and goes to great lengths to ensure that prospective owners are aware of them. In fact, customers at Kabeara Kennels will often be introduced to the parents of their new puppy, to give them an idea of how the puppy will act when he or she is older, including how they behave around strangers and how good their temperament and self-control are.

Likewise, Kabeara try to have all of their dogs registered with the Kennel Club and provide the necessary paperwork to prove this during all transactions. In fact, if – for some reason or another – the dog cannot be registered, Heaver and her team will allow the dog to be sold at a significant discount while making clear why the dog was not able to be KC registered.

Another concern the company has for customers is ensuring that they fully understand the grooming requirements of the dog. In fact, those who don’t manage to regularly brush the dog will find that their coats quickly become tangled and require a lot of work to fix.  Samoyeds actually have two coats of fur, with the outer one being thicker to help them endure what was historically their typical environment, and the inner one being a lot thinner.

Because they are such good companions for humans, it follows that they also require a lot of affection from their owners and families. It’s actually extremely common for them to become particularly attached to one family member in particular. Once this attachment happens, the dogs can become problematic when separated from them for longer periods of time, so this is a concern some prospective Samoyed owners may wish to heed.

For those of you who are seeking a lively and loving addition to your family, however, considering a Samoyed is definitely well worth your time; and, if you are considering one, taking a look at Kabeara Kennels and the service they offer is definitely worthwhile. With over thirty-five years of experience, it’s small wonder that they’ve developed the kind of expertise and care required to produce some of the finest – and most adorable – pups you’ll ever see.