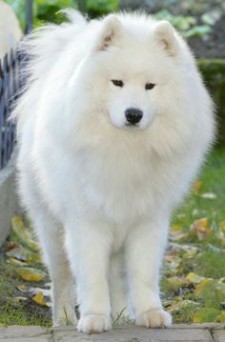 Lockport, Illinois, June 21, 2017 (Newswire.com) - For over twenty years, Kabeara Kennels have devoted themselves to one task in particular: rearing purebred Samoyed dogs in the most humane way possible, remaining especially considerate of the needs of their dogs, while also doing whatever they can do exceed their obligations as a business.

In fact, it’s fair to say that the welfare of their dogs come before business considerations. The owner of Kabeara Kennels, Teresa Heaver, even runs a blog where she shares the letters and emails she’s received from past customers who compliment her work excessively and thank her for helping them to find the pups they’d always wanted.

Her love for Samoyed’s in general, though, is equally apparent. When her blog posts don’t involve dogs that she’s personally been involved with, they nearly always demonstrate the playful and loving nature of this unique Spitz breed.

Named after the Samoyedic herders of Siberia, who originally used the dogs to assist with herding and pulling sleds when they were moving from one location to another, a small number of Samoyeds were originally taken on a variety of Arctic and Antarctic expeditions which happened over a period spanning the end of the 19th century and the beginning of the 20th century.

Their particularly valiant and yet playful and loving nature earned them a fondness from those who relied on them to undertake such arduous missions. Most Samoyeds now living in England and the United States are descended from this small number of expedition dogs, although others can trace their lineage to just after the first world war, when the breed was first imported from Russia.

As a registered breeder, she spends time with prospective owners of the dog, ensuring that they are aware of their specific needs and temperaments; in fact, she’ll even introduce the parents of each pup to the owner in order for them to get a good idea of how the dog will behave once it has grown.

Despite being constantly reliant on both each other as well as their human counterparts, the Samoyed’s usually gentle predisposition will often be spiked with bouts of excitement. This is especially true in colder weathers, which the dogs especially enjoy being that it is their natural environment.

Their strong herding instincts mean that they have an innate alpha-dog quality, and it’s not unusual for them to suddenly chase after other animals they happen to cross paths with (especially cats).

However, Samoyeds are especially suited to certain owners; those who love the aesthetic of the gorgeous breed, can provide it with the exercise it requires (especially when it is cold outside), would like a dog with a loving and caring nature, and think they would enjoy having a dog which is one of the most intelligent among the Spitz breeds, will all likely find a perfect companion in them.

Prospective buyers should also be aware, though, that there are certain drawbacks with the traditionally-Siberian breed. Not only are they especially excitable and needy during their early years, but they are known for shedding large amounts of fur.

Teresa understands this responsibility, and is not afraid to make her clients aware of how demanding the dog is; she ensures that all of her dogs are registered with the Kennel Club, and is able to provide the relevant paperwork for each puppy. Additionally, where dogs could not be registered, she is able to explain why, while providing the paperwork supporting this and offering a significant discount (assuming that it is otherwise fully fit and healthy).

Likewise, all of Kabeara’s dogs are x-rayed for hip dysplasia, while vaccinations are always up to date and claws are removed. A guarantee is offered to every Kabaera customer, and 50 percent of each purchase price is offered on receipt of a copy of a Samoyed’s AKC Champion Title.

Kabeara Kennels own a 6,000 square foot facility which comprises two separate floors, and this is the heart of their business. While Teresa forms a bond with every dog that she works with, she knows that they are going to good homes; in fact, a quick scan of the guestbook on the Kabeara Kennels website provides an accurate impression of the fantastic work the company is doing.

“Just wanted to say thank you for giving us the best dog ever! KOA came to us from Teresa two years ago. He is one of the best dogs we have ever had,” wrote Dave Leong in a post from September 2015. It’s obvious that with all the hard work and care they devote to what they do, Kabeara is the perfect place to look for those wishing to own introduce a Samoyed to their family home.