Eighty percent of Spanish cider hails from the Asturias region. The Teloscope has entered into a partnership with the Regulatory Board of PDO Sidra de Asturias to use the Telos Blockchain to maintain the integrity of this centuries-old craft. 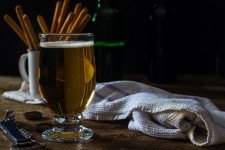 LONDON, December 19, 2019 (Newswire.com) - The possibilities seem to be endless for industries looking to get in on the revolutionary advances happening with blockchain, and one of the latest uses for this technology comes from a surprising source: the agri-food industry.

Lack of quality control, adulteration, and mislabeling are a concern for many industries, including olive oil, vinegar, honey, wine and cider, among others. The expanding global market makes it easier than ever to purchase products from anywhere in the world, but with such a separation from consumer to producer, how does one know what they’re really getting? In Europe, the two marks of quality and authenticity are the Protected Designation of Origin (PDO) and the Protected Geographical Indication (PGI). In order for a European product to qualify for one or both of these seals, certain strict requirements must be met and certified by a third party.

The cryptography used in blockchain technology has made it an increasingly popular tool for companies looking to improve and refine the traceability of their goods and services. Because data on the blockchain is unalterable once it is recorded, blockchain technology sets the bar high for supply-chain authenticity. Add public networks like Telos into the equation and you have elevated trust and transparency in the manufacturing of a product from start to finish. As a representative from The Teloscope said, “We think that a public network is more powerful and, like what happened with Internet versus Intranets, Telos will succeed in providing greater advantages to companies that dare to face the transparency challenge.”

A Telos-based block producer, Teloscope’s effective performance markers made it an easy choice for cider makers looking to gain the trust of their consumers through the blockchain. The parent organization of The Teloscope, CTIC, has entered into an agreement with the Regulatory Board of PDO Sidra de Asturias, and two major cider producers in the region are already using this revolutionary system.

The Asturias region in Spain, responsible for producing close to 80 percent of the nation’s cider, is the first of its kind to employ the strength of Telos in maintaining the integrity of its cider, whose origin and method of production are as important as the product itself. In providing a system to help prevent the adulteration of this cider, Telos is helping to preserve a culture and a way of life in Northern Spain.

Says Suvi Rinkinen, CEO of the Telos Foundation, "The beauty of Telos is that while it is available to everyone as a public network, the variety of one-of-a-kind apps coming out of it make it anything but ‘just another blockchain.'"​​

The Telos Blockchain is a smart-contract blockchain built to support the economies of the future.

Telos Sponsors dmail Which Aims to Bring Email to the Blockchain World
dmail, an innovative software that makes blockchain interaction more human, has deployed on the Telos blockchain with over 1 trillion MAIL tokens minted for the Telos community.
Telos Foundation - Oct 7, 2019
Newswire