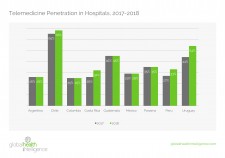 MIAMI, April 15, 2019 (Newswire.com) - Global Health Intelligence (GHI) recently partnered with researchers from Florida International University (FIU) to produce a study that examined the growth of telemedicine in Latin America, the predictors of usage in hospitals and strategies that will help expand adoption.

Telemedicine uses telecommunications infrastructure to remotely deliver healthcare services such as health assessments or consultations. It allows healthcare professionals to evaluate, diagnose and treat patients via video conferencing or smartphones without needing an in-person visit. Telemedicine can be particularly useful in Latin America given the uneven distribution of doctors and the significant lack of personnel in rural areas.​

Leaders and Laggards in Telemedicine Adoption in Latin America

According to GHI data, which came from HospiScope, its hospitals database:

·       Chile is the leader in telemedicine adoption in LatAm: 68 percent of the country’s hospitals offer this technology

·       Larger markets such as Argentina and Mexico still lag behind in telemedicine adoption — hospitals in these countries only have 26 percent and 29 percent telemedicine penetration, respectively

·       Uruguay and Peru had the largest increases in telemedicine adoption between 2017 and 2018, increasing by 10 percent and 6 percent, respectively

“While telemedicine is expanding unevenly in Latin America, flat in some large markets and high in smaller markets, there’s no question that more and more hospitals are starting to see the value of this technology,” says Guillaume Corpart, CEO of Global Health Intelligence and one of the coauthors of the Florida International University study.

The FIU study — whose results were published in Health Affairs in February 2019 — posits that a systems approach will help telemedicine expand even further in Latin America. As part of this systems approach, the study’s authors recommend incentivizing public and private hospitals, increased funding for telemedicine services, legislation to protect patient confidentiality and privacy, increased technical support and deepening telemedicine programs via new organizations and services that are aligned with population health needs.